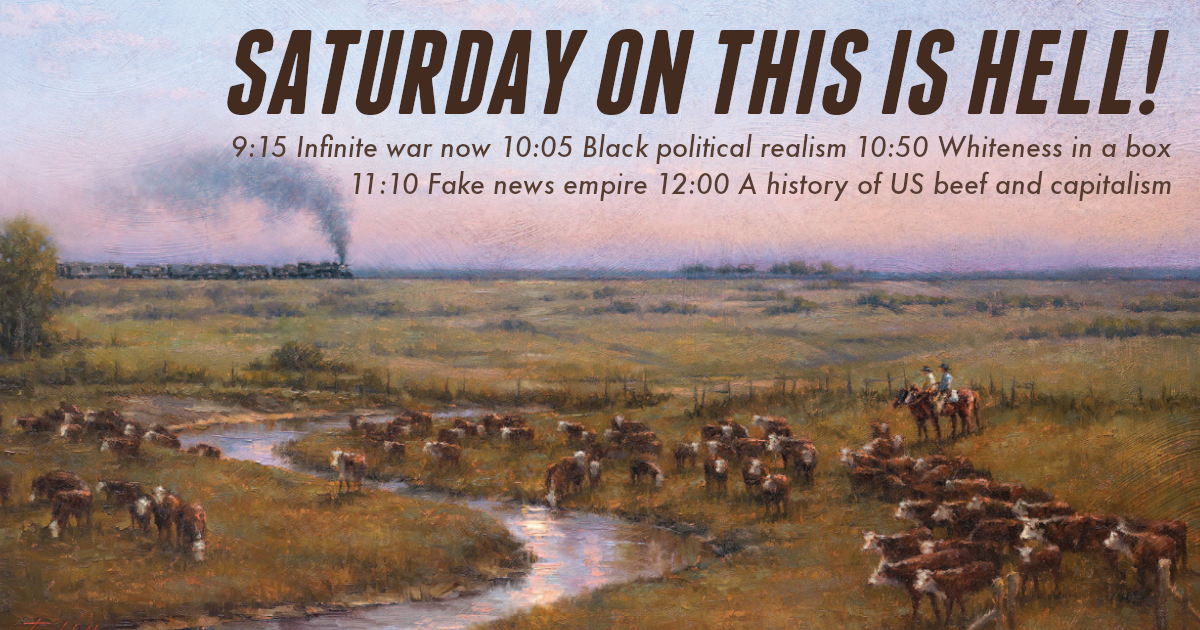 Allegra and Emily wrote the article The End of War Is Just a Beginning for TomDispatch.

Cedric wrote the article What Black Life Actually Looks Like for Jacobin.

10:50 - In a Moment of Truth, Jeff Dorchen Jeff looks in the big box of Whiteness.

And opens a WASPs nest in the process.

Danny is author of the book American Exceptionalism and American Innocence: A People's History of Fake News—From the Revolutionary War to the War on Terror from Skyhorse Books.

Joshua is author of the book Red Meat Republic: A Hoof-to-Table History of How Beef Changed America from Princeton University Press.

Moment of Truth: Faults In Our Deflection.

It’s a dangerous world. How do you make it safe? You can’t make everyone safe. You have to start by making yourself safe. How? By deflecting, so I hear. Deflection. It’s the coward’s way and you’ve got to give it to cowards, they’re all safety first.

I’d like to deflect a few things. Because I’ve heard that’s what clever people do, they deflect. Or maybe not clever people, successful people. I’m not sure what characterizes these people, to be honest, but deflection seems to be thought of as a successful strategy. I’m not sure for what. But successful on its own terms or on some terms.

I heard from an anonymous source that, at UCLA, a stupid uninoculated millennial may have exposed 500 people or so to the measles, those people were quarantined, and the school has been hushing it up, but you didn’t hear it from me.

My writing partner is saddened that chimps in the Detroit Zoo are no longer allowed to smoke. I agree, it’s an unfortunate decision. Everything gets ruined by these priggish bluestocking martinets. One of my fondest childhood memories is of going into the Great Ape House and seeing Jo Mendi II relaxing with a cigarette and the morning paper. What are the chimps supposed to do now when they’re having coffee or a beer?

Trump writes up an executive order that health workers can refuse to give medical care for religious reasons. So if a Satanic pharmacist doesn’t want to sell you reading glasses because you’ll use them to read the Bible, you’re out of luck, Junior.

Look, I’ve wasted my life. I did it just to see what that would be like. And it’s fine. It’s miserable, yeah, but lots of people are miserable who haven’t wasted their lives at all. They’ve created quite beautiful things, like restaurants or symphonies or babies. Yet they can be miserable, physically miserable, living in misery. I’m just miserable because I’m haunted by self-disgust. Because I’ve wasted my life, and I did it on purpose, just to see what it would be like. And it’s great, really.

But it was a stupid thing to do, in other ways. But then, wasn’t it stupid of us to allow things to get to this point? Where everything is melting and burning, and only incredibly stupid, vile people are allowed to hold public office?... read more 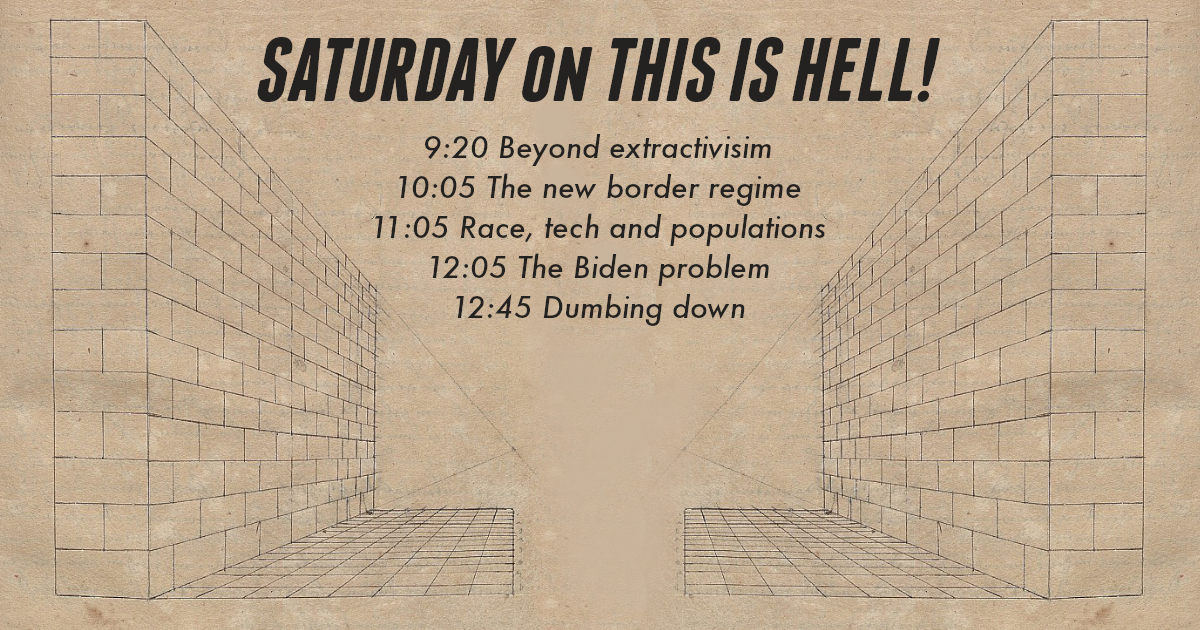 Thea wrote the article What Comes After Extractivism? for Dissent.

Ruben is author of No Go World: How Fear Is Redrawing Our Maps and Infecting Our Politics from University of California Press.

11:05 - Investigative journalist Yasha Levine explores a century of technology and racism in the US census.

Yasha wrote the article The Racist - and High Tech - Origins of America’s Modern Census for Medium.

12:45 - In a Moment of Truth, Jeff Dorchen catalogues evidence of our decreasing intelligence. Or at least his.

Moment of Truth: Cursing The Darkness Without A Single Candle .

I’ve been trying to channel someone with admirable traits lately, because I have none left. Not sure I ever did. Was I kind and forgiving at one time? Emotionally generous? Did I suffer fools gladly? Did I suckle baby iguanas at my teat of human kindness?

I am despicable. Self-despicable. I am very self-reliant in that one regard. I can definitely despise myself. All by myself.

I do have one consolation. At least I’m not a social climber. I lack the prehensile tail, much less the embouchure it takes to cling to someone else’s upwardly moving prehensile tail by my lips.

But the rest of you, oh my god, how did you all get like this? You’re worse than me! And I’m not the only one who thinks so. I say that without a shred of proof, just evidence gathered like one might gather crumbs on a table cloth and call them a cookie. Like Alex Jones does with fragments of lies.

Just think: Alex Jones exists. That alone ought to be enough to convince any objective observer that our species has outlived its redemptive potential.

I can’t figure out who I hate more: the left, the right, or the middle? Or the up? Or the down? There is an interlocking ecology of annoyances these days. I can’t stand the interrogation of the self that brings forth nothing but oversimplifications. The academics who can’t utter one comprehensible word, and the academics who CAN utter comprehensible words but they’re always reactionary words. I don’t know who’s more intolerable, the people I can’t stand or the people who can’t stand me or the ones who overlap into both categories.

The white people and the Chinese and the Persians and Greeks and Mongols and Tatars started it. Conquering. But even that idea is too complicated for a lot of you. I can’t even itemize what aggrieves me anymore. This is how bad it’s gotten. This is how bad YOU’VE all gotten. 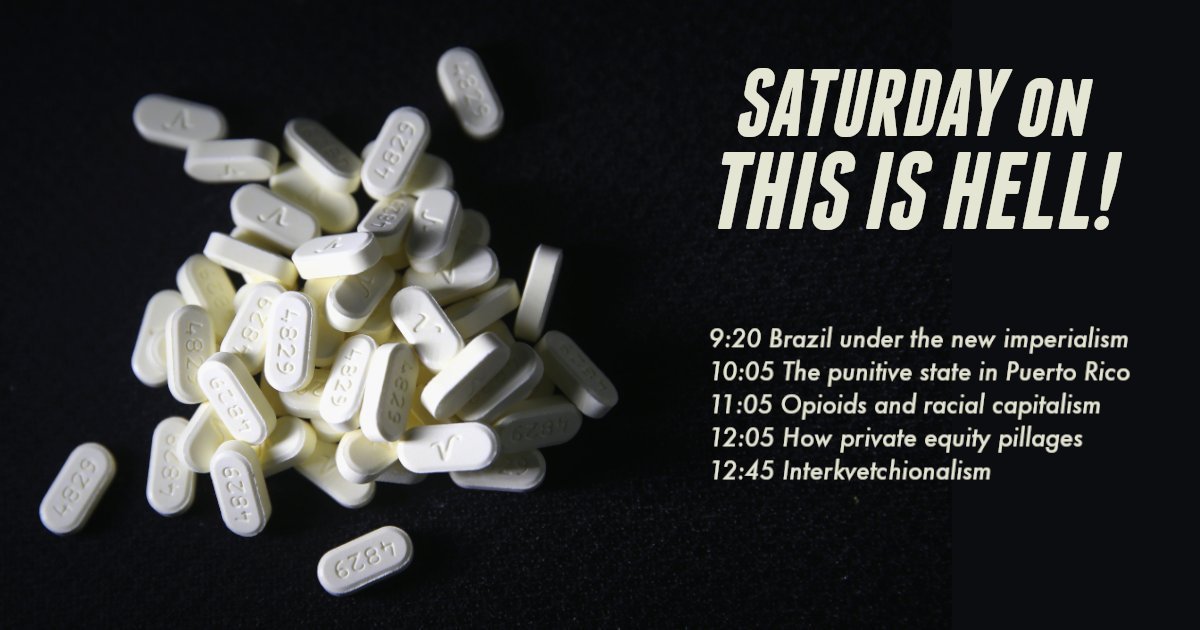 9:20 - Live from São Paulo, Brian Mier connects fascism in Brazil to imperialism in the US.

Brian is co-editor of the new book of interviews Year of Lead: Washington, Wall Street and the New Imperialism in Brazil from Brasilwire.

Marisol is author of the new book Policing Life and Death: Race, Violence, and Resistance in Puerto Rico from University of California Press.

11:05 - Historian Donna Murch traces the racial divide between the opioid crisis and the drug war.

Donna wrote the article How Race Made the Opioid Crisis for Boston Review.

Eileen and Rosemary wrote the report Private Equity Pillage: Grocery Stores and Workers At Risk for The American Prospect, reposted at CEPR.

12:45 - In a Moment of Truth, Jeff Dorchen complains intersectionally.

Moment of Truth: David Frum’s Common Sense Is Neither.

When I first saw David Frum, I said to myself, Damn, that guy’s ugly. Then I heard the bs that came out of his slobbering maw and said, aloud, “Uch, shut up.” Frum is one of those conservatives who fancies himself fair-minded, so he sporadically takes some positions which those defining conservatism at any given time call “liberal.” It’s like being a light-drinking alcoholic.

Last week, as current editor of the Atlantic, Frum took his ersatz common sense and applied it to what I’m going to call “the immigration question.” On the anniversary of the Warsaw Uprising, I do indeed intend the phrase to echo “the Jewish question” which was posed by a certain common-sense party in Europe in the 30s and 40s. I don’t mean to call Frum a Nazi, but to aver that there is an unflattering comparison to be made between the way Jews were considered a problem back then and the way immigrants are being considered a problem right now, and Frum’s discussion highlights just about all of its unflattering aspects.

To Frum, immigrants lower the national IQ, strain our social budget, and pollute what it means to be American. That is an oversimplification of his argument, but not a gross one. I want to state plainly that, in this case, I am a bigot. Even if the above statements were true, I wouldn’t consider them problems.

If we had to rescue millions of severely mentally handicapped children from extermination in, say, Europe, or, say, Uganda, or, say, Syria, the fact that they would bring down the national testing average would not be one of my concerns. The real issue Frum elides, however, is that, as a nation, we don’t commit resources to our public schools. In our cities, “common-sense” Republicans and Democrats alike are bailing on providing education to the public. With or without immigrants, this would be true. Neo-liberalism, or trickle-down economics, or the Washington Consensus, or whatever those with “common sense” want to call it, is doing its best to starve the public of resources, or outright steal the public’s resources, and all the “immigration question” does is offer these “common-sense” advocates of privatization and “market solutions” with another crisis they can use to bludgeon the public sphere into... read more