In 1657 – (362 years ago) — several months of drought, along with gale-force winds, brought on the perfect conditions for a catastrophic fire that consumed large parts of the Japanese capital city of Edo, known today as Tokyo. Legend has it that the initial sparks were created by a temple priest in the city who was burning a kimono that held a fatal curse after being owned by three young girls in succession who had all died before getting the chance to wear it. Whatever the fire’s real cause, it spread rapidly in a densely built city where houses and other buildings made of wood and paper stood in long narrow streets, and fiery embers were easily carried by the wind from one neighborhood to the next. The city had a fire brigade, and the firefighters rose gallantly to the occasion, but they were quickly overwhelmed by the rapidly spreading conflagration, which lasted for three days. About sixty percent of the city was destroyed — including not only vast working-class residential districts, but also many rich mansions, and even parts of the shogun’s castle. Between one and two hundred thousand people were killed — a figure unmatched for almost three hundred years until the same city, under its new name of Tokyo, was firebombed by US Army air forces in 1945. 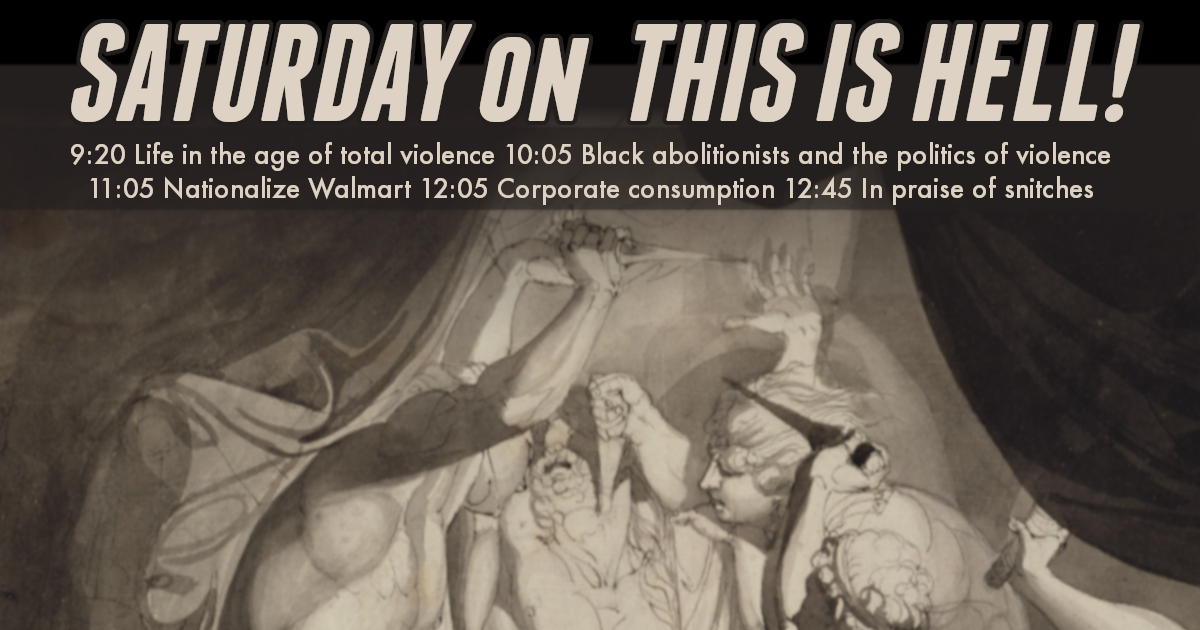 Brad is author of the book Atrocity Exhibition: Life in the Age of Total Violence from Los Angeles Review of Books.

Kellie is author of the book Force and Freedom: Black Abolitionists and the Politics of Violence from University of Pennsylvana Press.

11:05 - Leigh Phillips and Michal Rozworski explain how to get from global corporations to worldwide socialism.

Michal and Leigh are authors of The People’s Republic of Walmart: How the World’s Biggest Corporations are Laying the Foundation for Socialism from Verso.

12:05 - Historian Christina Ward examines how (and what) corporations taught Americans to eat in the 20th century.

Christina is author of the book American Advertising Cookbooks: How Corporations Taught Us to Love Spam, Bananas, and Jell-O from Feral House.

Stay dry out there, snitches.

Moment of Truth: The Leftovers

Back when slimy Richard Nixon was Eisenhower's vice president, he got together with the CIA and planned what became the Bay of Pigs invasion. This isn't conspiracy theory stuff, this is conspiracy fact. Nixon says so in his own memoirs. It was this weird crappy holdover plan from the past administration that was forced on JFK by the accumulated buildup of intelligence, foreign affairs and defense experts, anti-communist parties obsessively bent on making sure nothing like a remotely successful anti-capitalist revolution lingered in the historical imagination, let alone actually existed somewhere in our hemisphere. Such parties were built-up residue in the so-called national security apparatus, like plaque, impossible to dislodge by mere electoral means. And so they persisted.

They said, "Kennedy, man, we really don't like you, you're the new guy, you're Catholic, your dad was a rum-runner, you're slick, we're WASPs, we're the militaryindustrial complex, you really need to please us. So here's your chance to get on our good side, it's this plan we're kind of already committed to so you really have to do this. Trust us, once this little canoe full of Cubans starts the counter-revolution, all the Cubans will rise up to overthrow Castro because they're all itching to go back to quasi-slavery under a US puppet regime." And JFK was like, "Is this one of Nixon's leftover schemes? Cuz you know Nixon lost the election, right?" And they were like, "No matter who wins a US election, we're always in charge." And JFK said, "Look, you kind of sprung this on me in the middle of the night, but it's already in progress, so okay, fine."

So this handful of 1400 or so Cuban exile fascist doofuses sets out from Guatemala, which the very same US military-industrial complex had overthrown six or seven years earlier, and they get to the Bay of Pigs – JFK was like, "Really, 'Bay of Pigs,' you couldn't pick a bay with a better name, like the Bay of Condors or Tigers or something? If this fails it's gonna sound really slimy' – And these doofuses fight with the revolutionary army and they're losing and the Cuban people are like, "Um, hey, look over here, the USA is trying to overthrow Castro, everybody." And the world was like, "Yeah, what did you expect? Castro nationalized all the assets the US was stealing from you." 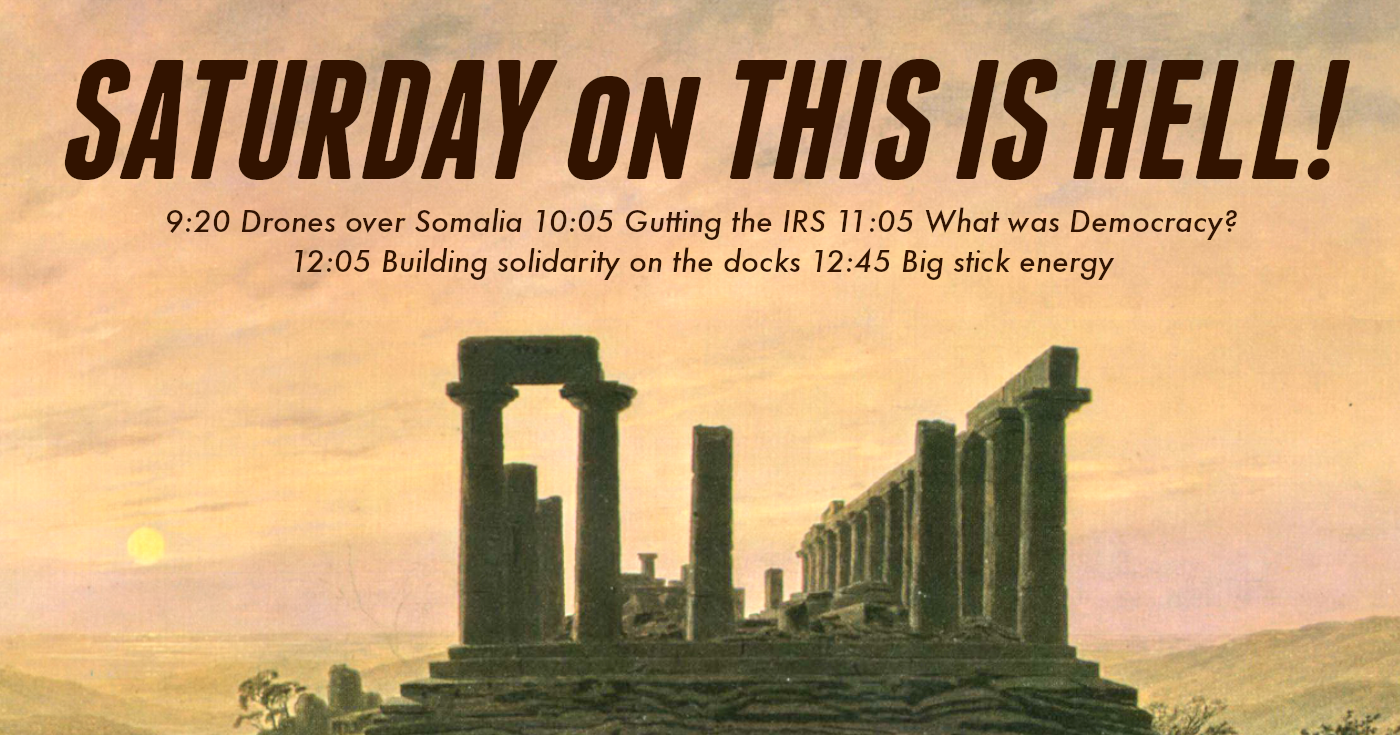 9:20 - Journalist Amanda Sperber reports on the known unknowns of the US drone program in Somalia.

Amanda wrote the article Inside the Secretive US Air Campaign In Somalia for The Nation.

Jesse co-authored the report How the IRS Was Gutted with Paul Kiel for ProPublica.

11:05 - Filmmaker Astra Taylor explores what democracy has been, and what it might someday become.

Astra's new film is What Is Democracy?. The film is out now / soon depending on the city. Astra will be in Chicago Friday and Saturday screening and talking about the film.

Peter is author of the book Dockworker Power: Race and Activism in Durban and the San Francisco Bay Area from University of Illinois Press.

12:45 - In a Moment of Truth, Jeff Dorchen whacks the big stick from the Bay of Pigs to Caracas.

Moment of Truth: The Dinosaurs Are Boned.

Things are going to change. We can try to influence those changes to raise our chances for a decent future, or we can wait for the changes to happen to us.

One change that is definitely going to happen is, we're going to stop using fossil fuels. And we're going to stop polluting the environment. Either we'll make these changes by choice, or by default. Either we will transform the way we produce and consume energy and other resources, or our present course will render us too dead to continue.

Fossil fuels, it's in the name. They are fossils. Old and petrified. Their time was up long ago. The oil-gas-and-coaligarchy has held onto its dominance over land, sea and air by overthrowing governments, displacing and massacring entire populations, buying the governments too white to destroy and replace, and everywhere distorting elections and laws with bribery and coercion. They're not nice. They've overstayed their welcome.

I think dinosaurs would be offended by our use of the term "dinosaur" to mean an entity whom time has passed by, who no longer understands current events and is itself, in word, deed and physical incarnation, an anachronism in the culture. Cartoon dinosaurs, Gary Larson "Far Side" dinosaurs, would be offended, not literal dinosaurs, they don't exist anymore. The Larson ones would consider it a derogatory term, not just as an insulting metaphor, but as an actual identifier for themselves. "I'm a stegosaur, I'm a triceratops, I'm a sauropod, don't call me the 'D- word.'"

Actual dinosaurs are fossils. Not in the pejorative sense. They're really fossils. Their flesh has been replaced by sedimentary minerals over tens of millions of years. Although some evolved into birds.

But Larson sauropods and their ilk, they'd be mad. So out of sensitivity to cartoon prehistoric bird ancestors, I'm going to say "D-word."

In an effort to get ahead of the coming changes – to change our behavior before the consequences of our behavior change us into corpses – the new Democratic Congresspersons, voted in on a wave of hatred of Donald Dump, the cartoon duck with no pants, have introduced an introduction to legislation they propose to propose. Of course, because it's intended to solve actual problems rather than placate those who cause the problems, it's being pooped on by dinosaurs and their advocates. Dinosaurs like James Carville,... read more 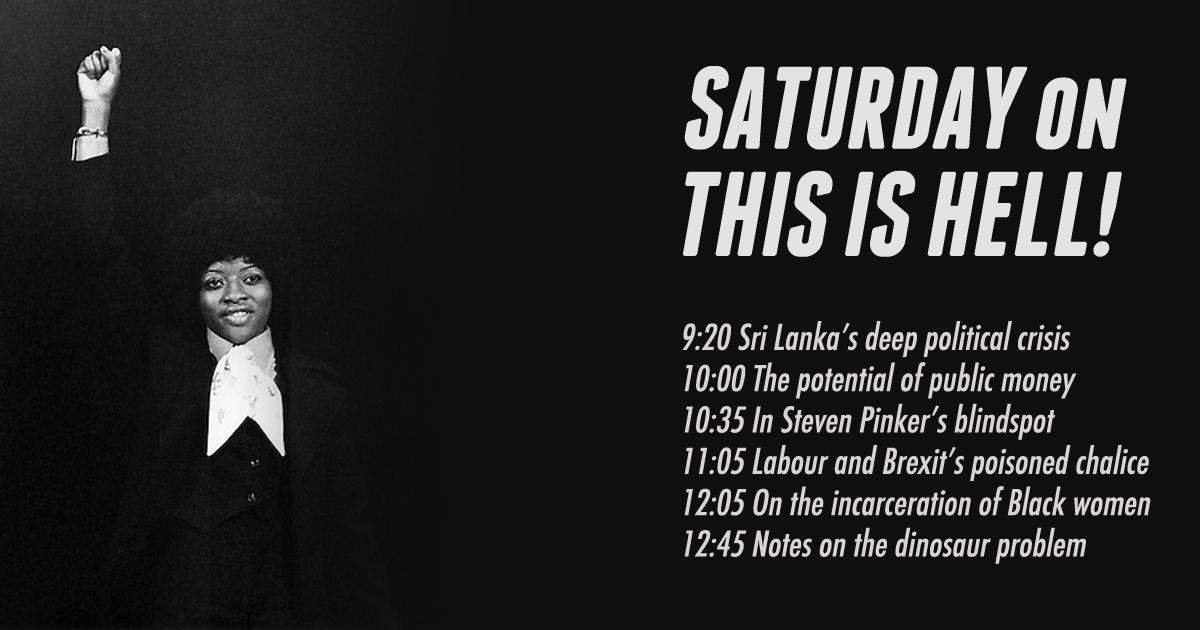 Kanishka wrote the article The Crisis in Sri Lanka for Jacobin.

Lavinia wrote the essay The Power of Public Finance for the Future we Want for the Transnational Institute's State of Power 2019 report.

Jason wrote the post A letter to Steven Pinker (and Bill Gates, for that matter) about global poverty at his site. We talked with Jason in June 2018 about his book The Divide.

Richard is author of the essay Brexit and the "white working class" posted at his Patreon page.

DaMaris is author of the book A Bound Woman is a Dangerous Thing: The Incarceration of African American Women from Harriet Tubman to Sandra Bland from Bloomsbury.

12:45 - In a Moment of Truth, Jeff Dorchen handles the dinosaur problem.