Holidays in the Athropocene [September 25 2019]

Here's what we read this week.

Waste Only: How the Plastics Industry is Fighting to Keep Polluting the World - Sharon Lerner / The Intercept

Can you hear me? - Greta Thunberg / Communists in Situ

The voice from the black hole - Sam Kriss /

Everything Must Go - Whitney Curry Wimbish / The Baffler 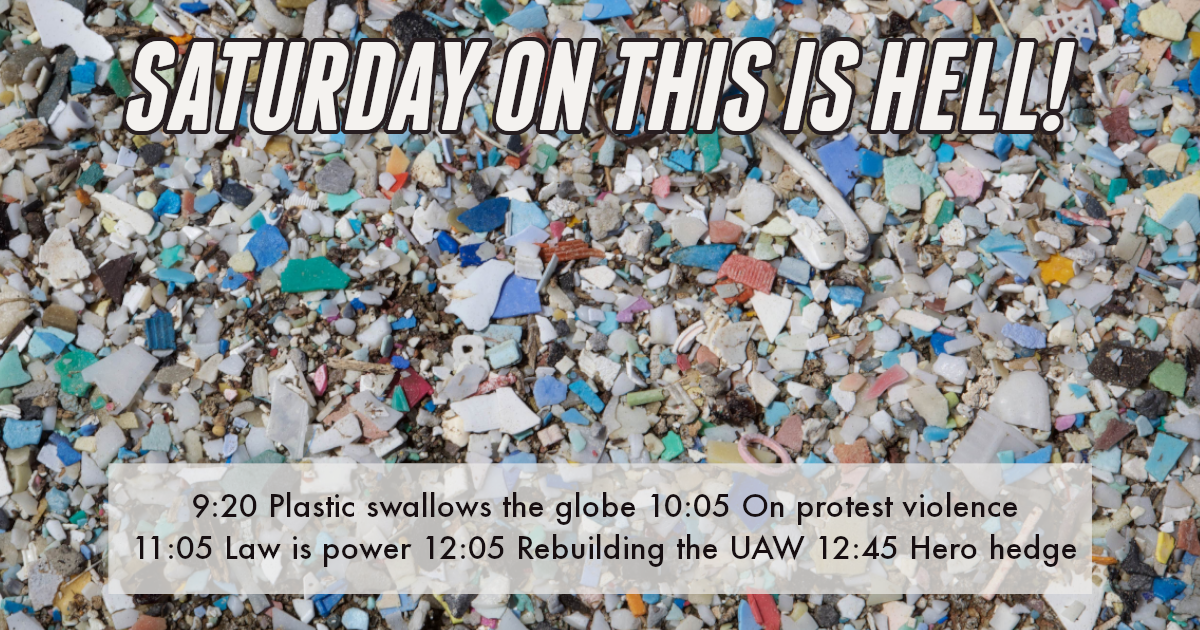 Sharon wrote the article Waste Only: How the Plastics Industry is Fighting to Keep Polluting the World for The Intercept

Jack is author of the book Law Without Future: Anti-Constitutional Politics and the American Right from University of Pennsylvania Press.

Thomas wrote the article A tale of corruption by the United Auto Workers and the Big Three American automakers for Monthly Review.

12:45 - In a Moment of Truth, Jeff Dorchen wonders if it's worth having heroes.

Saturday on This Is Hell!

Brian wrote the article Withdrawal of the extradition bill in hong kong is likely too little, too late to put an end to protests for New Bloom.

Alex is author of the book How to Justify Torture: Inside the Ticking Bomb Scenario from Repeater Books.

11:05 - Activist Keir Milburn explains how left politics opened up for a generation of young people.

Keir is author of the book Generation Left from Polity.

Jonathan is author of the book This City Is Killing Me: Community Trauma and Toxic Stress in Urban America from Belt Publishing.

Spiders are spinning their webs in the grass: pretty, tiny, black jumping spiders, with turquoise rings around their abdomens. Spiders have spinneret glands to poop out their web strands. That’s one way to do it, I guess!

Kids with excellent eyesight can watch the spiders spin. So can old people who once had good eyesight but now have excellent reading glasses. From the vantage point of the kids, it all looks like an arachnid multi-scene diorama. The spiders appear to be weaving rustic booths in the grass, tiny bamboo booths with roofs of foliage, like tiny sukkahs for Sukkot, the harvest festival. These are Jewish spiders. Their turquoise comes from their retired Uncle Nate in Arizona.

One spider, I don’t know if he’s Jewish or not, spins his webs out of gold. His name is Epstein. I heard this story about Epstein on “The Daily,” the New York Times podcast, hosted by Michael Barbaro. It was one of many gruesome tales I’ve read or heard about this gold-spinning spider. Like all the stories about him, it’s appalling. I don’t even like thinking about them, any of them, but this one especially sickens me. Nevertheless, it should be known, so that you can understand only the smallest fraction of the way Epstein wielded his wealth. It’s illustrative of the weaponization of power through, not only wealth inequality, but gender inequality and age inequality, and a slew of other inequalities that come together to make up status inequality.

This is the story of an artist in her mid-twenties, so she wasn’t under the age of majority, as many of Epstein’s victims were. We’ll leave behind the spider metaphor for a bit, though we’ll come back to it.

Maria was an artist, not a spider. The only reason I couple spiders and the story of Maria is that what Epstein did to Maria was a violation. And the thing I think of when I think of good things being violated is industrious, busy spiders of the variety I’ve described above, weaving their tiny sukkot in their tiny diorama world in the grass, and that impulse of pure endeavor being invaded by conquistadors. It’s a world like that one, being violated. A world of effort and beauty, of individual and communal spirit, and of ritual, being violated by a creature weaving webs of gold and injecting his prey with venom that liquifies their... read more 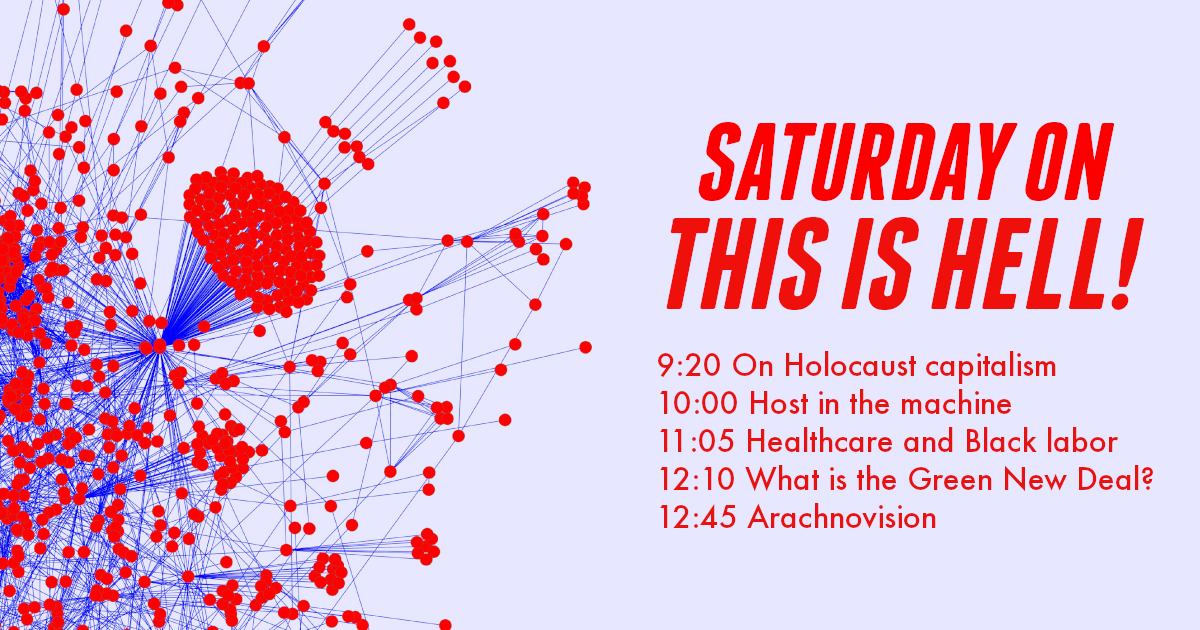 Richard is author of the new book The Twittering Machine from The Indigo Press.

Adia is author of the new book Flatlining: Race, Work, and Health Care in the New Economy from University of California Press.

12:10 - Historian Aviva Chomsky looks at what the Green New Deal is, and isn't, and could be.

12:45 - In a Moment of Truth, Jeff Dorchen looks too closely at spiders.