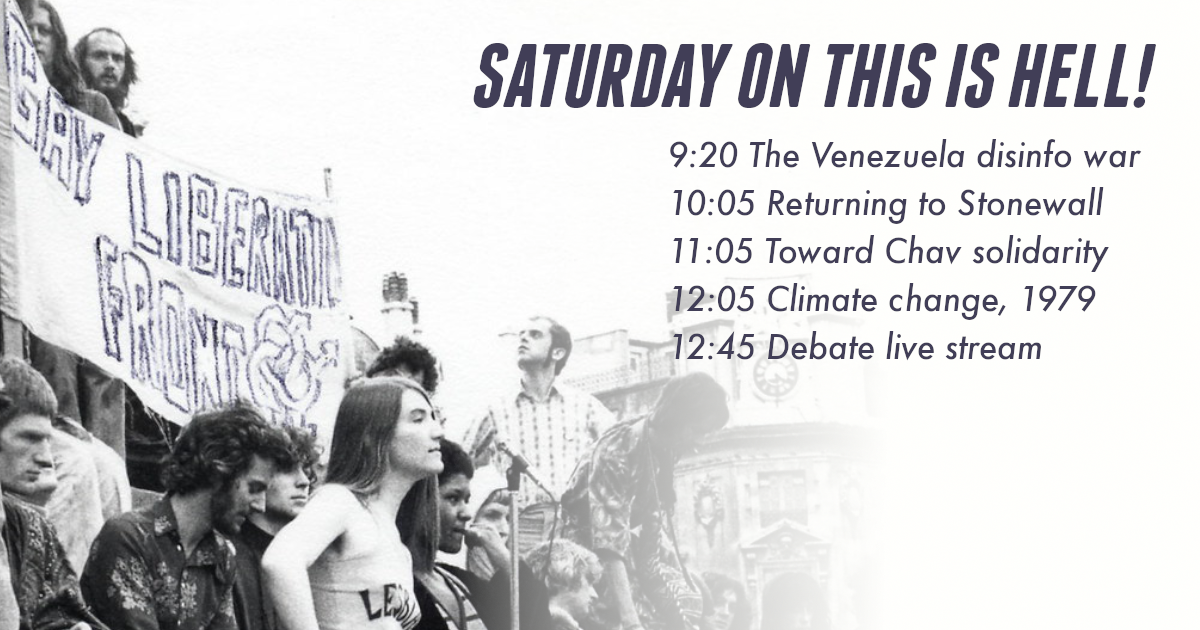 Lucas wrote the article There’s Far More Diversity in Venezuela’s ‘Muzzled’ Media Than in US Corporate Press for FAIR.

10:05 - Activist Andy Thayer explains what LGBT activism has lost - and must relearn - since the Stonewall uprising.

Andy wrote the article Why Stonewall Matters Today for Jacobin.

11:05 - Organizer D Hunter explores struggle and solidarity on the wrong side of the class war.

D is author of Chav Solidarity. D is raising funds for Lumpen: A Journal of Poor and Working Class Writing. Help him out.

12:05 - Writer Nathaniel Rich traces a 40 year history of knowing everything and doing nothing about climate change.

Nathaniel is author of Losing Earth: A Recent History from MCD Books.

12:45 - In a Moment of Truth, Jeff Dorchen reviews the memes of the first Democratic debate.

Moment of Truth: We Just Need To Know Our Limits

Have you seen HBO’s Chernobyl? All the young Stalinists today are calling it “anti-Soviet propaganda,” as if propaganda were necessary to find a totalitarian thought-policing bureaucracy unpalatable. Anyway, whether it hews to reality or not, it’s a great story of idiots in denial finally brought face-to-face with their hubris of thinking they can control technology.

But we must recognize when enough is sufficient.

I saw a video of a robot being hit by humans with rods, wobbling a bit unsteadily but regaining its stability, taking the rods away from its assailants, then threatening to thrash them if they tried to attack again. One woman’s comment to this video, “Can we stop being mean to robots?” My comment, “Can we stop improving robots?” Because people act like it’s inevitable that robots are going to get more agile and effective. It’s not inevitable. We can say, “I don’t want to live in that Black Mirror episode where the robot dogs hunt people down. Don’t build those!” 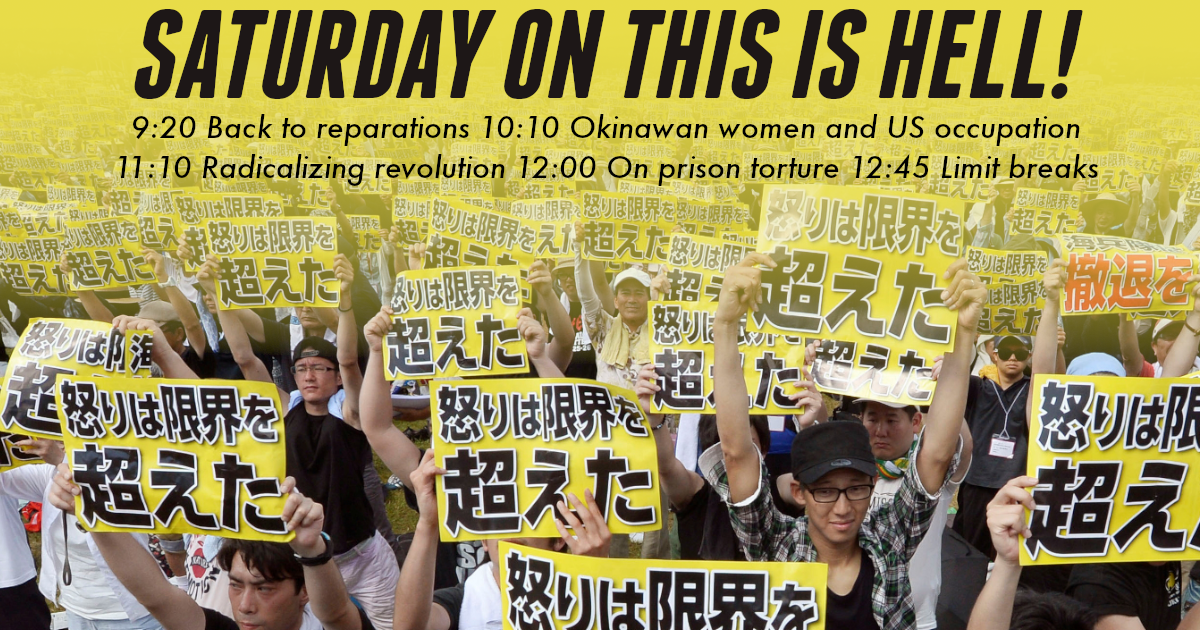 10:10 - Writer Akemi Johnson explores the lives of Okinawan women living under US occupation.

11:10 - Writer Zillah Eisenstein explains why the next revolution must be feminist and abolitionist.

12:00 - Journalist Aviva Stahl reports on isolation, torture and secrecy in an American prison. 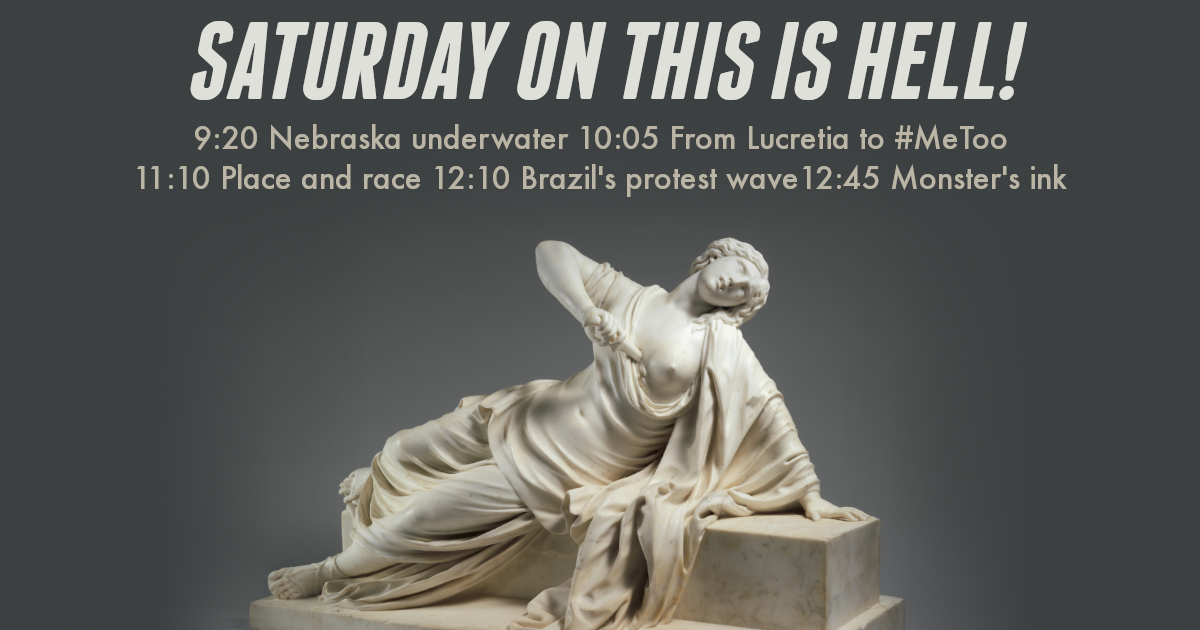 Ted wrote the article River of No Return for The New Republic.

10:05 - Cultural critic Mithu Sanyal deconstructs a 2,500 year history of rape in our culture.

Mithu is author of the book Rape: From Lucretia to #MeToo from Verso.

Genevieve is author of the book Collisions at the Crossroads: How Place and Mobility Make Race from University of California Press.

Brian reported on the 1.8 million large strike wave for TeleSur English's program From The South.

12:45 - In a Moment of Truth, Jeff Dorchen reads an interview with a monster.

Moment of Truth: A Sliver Of Slotkins.

This is going to be a mere sliver of the mansion of love and mourning and celebration and remembering that the world’s people who knew Danny Thompson are revisiting right now and will probably carry on revisiting forever. My sliver. And it’s okay if this is only a small fragment of the lore and legacy of Danny E’ward Beano Q. Slotkins Esteban Vincente Harriett Beecher Stowe Thompson.

I don’t know if you’ve been paying attention to the Theater Oobleck extended family social media reverberations, but we lost the father and scientist and friend and advisor and brother and stylist and baby and craftsman of us all, Danny Thompson, to a freak genetic ailment. On Monday night I heard he was in the hospital, awaiting a new liver, but in no danger, and on Tuesday morning I woke up to an email to the Oobleck core company members group saying he had died. Mickle Maher was crying. I barely got out of bed that day. Death had to take him quick, I thought at one particularly stupid moment, because with more time he’d have figured out a way to escape the Dumb Reaper. That Reaper is a bozo. He’s not as good a chess player as he’s reputed to be, either. He’s not even grim, he’s just an asshole.

If you don’t know what you’ve lost, world, you’ve lost plenty. You’ve lost everything. You think this is an exaggeration. How wrong you are. Danny Thompson lived as he liked, and loved as he wished, and was just the all-around master of creative flow.

I met him in Ferndale, in high school, although I don’t think he was in high school anymore by the time I met him. Anyway, he went to a different high school than I did, when he did. I met him when I was in high school, but when he wasn’t in a different high school. I remember him having a car, a big powder blue muscle car with weird chrome ornamental spheres embedded in the hood. It had a Winnebago engine in it, he said. His mother’s boyfriend, Dan, was an auto- mechanic. Danny’s good friend Tony Rowe was a hybrid Native American who had been dishonorably discharged from the army. He’d been stationed in Korea patrolling the DMZ and had punched his CO and broken his jaw. They allowed him to avoid prison if he gave up all his veteran’s benefits. This is how I remember it. And Tony had a friend, Roy. And I’m... read more 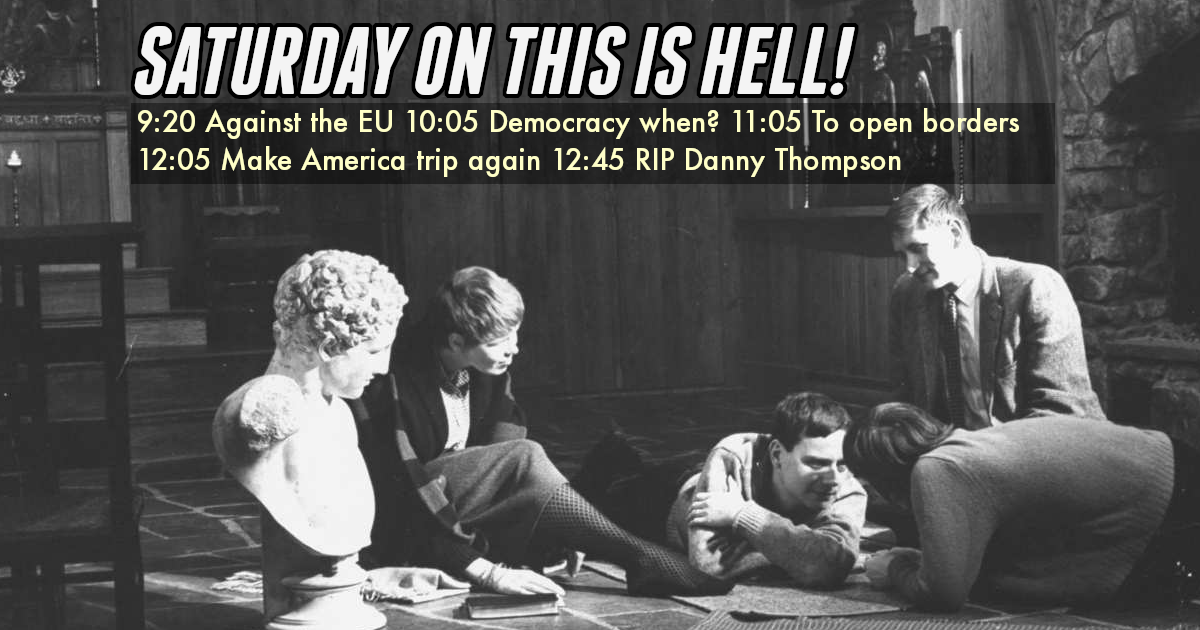 9:20 - Journalist Thomas Fazi explains why no one is voting for democracy in the European Parliament elections.

10:05 - Writer Astra Taylor dreams of democracy's radical potential, and one day reaching it.

12:10 - Writer Garrison Lovely explores the past and future politics of psychedelic drugs.

12:45 - In a Moment of Truth, Jeff Dorchen honors Danny Thompson, A Legend of The Arts gone too soon.