Moment of Truth: Alarming How Charming It Is To Be A-Farming

I've been thinking about farmers and what Donald Dump, that cartoon duck with no pants on, has been doing to our partners in agriculture from the Latin lands to our south. Apparently it's been made more difficult to come from southern countries to farms here in the US, and I've heard that there are US farmers who can't pay enough to the workers who are here to maintain a sufficient labor force to do all the picking and such. And it's always puzzled me that growers of food crops always seem to be in need of subsidies, always worried about overhead, always on the verge of ruin, sometimes even when their crops come in abundantly. I know commodity prices can go up and down for a variety of reasons, but that's not what puzzles me.

Eating never goes out of style. All organisms must consume something to live, and humans eat just about everything, all the time. Being a farmer should be like being a mortician during a plague, a really going concern. And the world's farmers are really good at what they do! They produce more than enough food for all the people alive today, though that food somehow has a hard time getting to a lot of those people.

There's a recent ad from IBM saying that the world's population is going to top 10 million soon, and that food production will have to increase 70% to accommodate them all. 10 million is less than a 50% increase, closer to 25%, in the number of people that exist now, and we could feed all the people living now, so I guess IBM's artificial intelligence has decided that the new bunch of people are going to be genetically engineered gluttons or something. What's up your sleeve, IBM?

What we really need is not a system that produces more food, but a system that distributes the current amount produced to all currently existing people who would like to eat it. And we don't have that system. Growing more food or more nutritious food isn't going to feed the hungry people, if we can't even give them the food that we already have. Food we throw away. 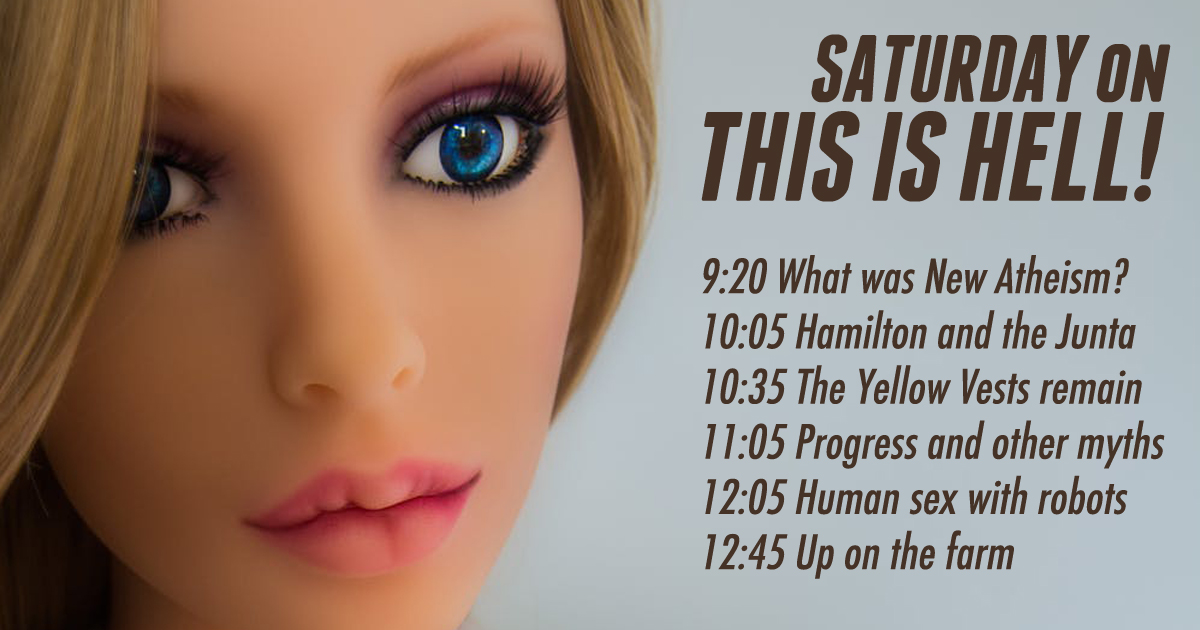 Jacob wrote the article What Was New Atheism for The Point.

10:05 - Our Man in San Juan, Dave Buchen reports on Hamilton coming to Puerto Rico, and the junta staying there.

Listen to Dave's reports from Puerto Rico here. Oh and his 2019 calendar is here and very good.

10:35 - Live from Paris, Cole Stangler explains how the Yellow Vests took their own 'national debate' to the streets.

11:05 - Writer Ben Ehrenreich explores the magical thinking behind the myths of progress and Western Civilization.

Ben wrote the article After the Storm for The Baffler.

Kate is author of the book Turned On: Science, Sex and Robots from Bloomsbury.

The object of any capitalist enterprise seems to be to contrive, through law or violence, to control the greatest amount of resources possible, and to increase such control even beyond time and the possible. There is no point at which the capitalist enterprise is programmed to decide enough is enough. The resources it seeks to command include what we normally think of as wealth or capital, such as raw materials, space, time, and money, as well as physical human beings, where they are in space and how they exert their energy at any given time, but also including their ineffable attributes: loyalty, passion, purpose, wishes, sexual feelings, determination, perseverance, language, ignorance, knowledge, imagination, anxiety, pettiness, preference, and any number of other intangible energies, to which a name may or may not be attached.

Does capitalism succeed in its quest for control? Yes it does. What can put the breaks on its quest? Unions, the power of which has been waning since and partially because of the Reagan administration; government, which has been known to vacillate between bowing to the influence of the people and to that of capital, with capital in the excessively ascendant currently; and natural forces, although any limit imposed by so-called "nature" is often turned by capital into yet another opportunity or public excuse to exert other kinds of control.

All limits are just more business opportunities. Is the world crumbling due to fossil fuel emissions? Here's a battery! The concerned consumer never sees the emissions produced during lithium extraction, battery manufacture, and generating the electricity used to charge the batteries, all of which activities occur "off-camera."

Are unions forcing you to raise wages? There's a company you can hire to undermine labor solidarity. There are all kinds of lobbyists hired to convince governments to hire the capitalist to remove obstacles to capitalism, and think tanks to advise governments to listen to those lobbyists. It's big business, removing obstacles to business, and everyone wants in on that gravy train. It's a viciously circular feeding frenzy, and the great masses of us outside of uber-wealth are the bait ball.

The ability to profit from our emotions, both petty and grand, and the ability to turn catastrophe and human misery into investment opportunities, seem to be the two aspects of... read more

In 1700 – (319 years ago) — the Pacific Northwest area of North America was ripped by a massive 9.2 earthquake along a fault stretching some six hundred miles from Vancouver Island to what is now northern California. Although no direct records of the quake exist from that time, scientists have deduced its time and intensity from detailed records of a tsunami that struck the east coast of Japan shortly afterward. Further evidence of the cataclysm was also preserved in growth rings in trees, and is also found in the oral traditions of local Native American and First Nations people, which tell of an apocalyptic blast that struck without warning on a winter’s night, accompanied by floods and landslides that buried entire villages and swept people into the sea, never to be heard from again. Scientists have uncovered other clues suggesting that earthquakes in that region have occurred in a cycle of roughly once every three to five hundred years. In some estimates, they suggest a 37 percent chance of another major quake occurring in that area within the next fifty years.

In 1856 – (163 years ago) — fed up after months of chaotic battle with white settlers in what became known as the Puget Sound War, a force of several hundred Native Americans attacked a white settlement located on a small peninsula at Seattle. In their armed response, the settlers were quickly supported by Marines from the USS Decatur, a Navy ship anchored just offshore. The battle lasted all day, and it ended with at least twenty-eight Native Americans dead, eighty wounded, and the rest demoralized in retreat. The whites, meanwhile, had suffered only two deaths, and would go on maintain and reinforce their hold on the peninsula.

In 1977 – (42 years ago) — former vice president, presidential candidate, and New York governor Nelson Rockefeller died of a heart attack. The first news reports of his death claimed that he had been found slumped over the desk in his office. But contradictions quickly appeared in the official story, and it soon turned out that in fact Rockefeller had met his end while alone in a Manhattan townhouse with a twenty-five-year-old woman who worked for him, and whom he had helped to purchase a condo. While Rockefeller’s family struggled to deny rumors of an illicit sexual affair, the incident quickly became the subject of jokes on late-night television. 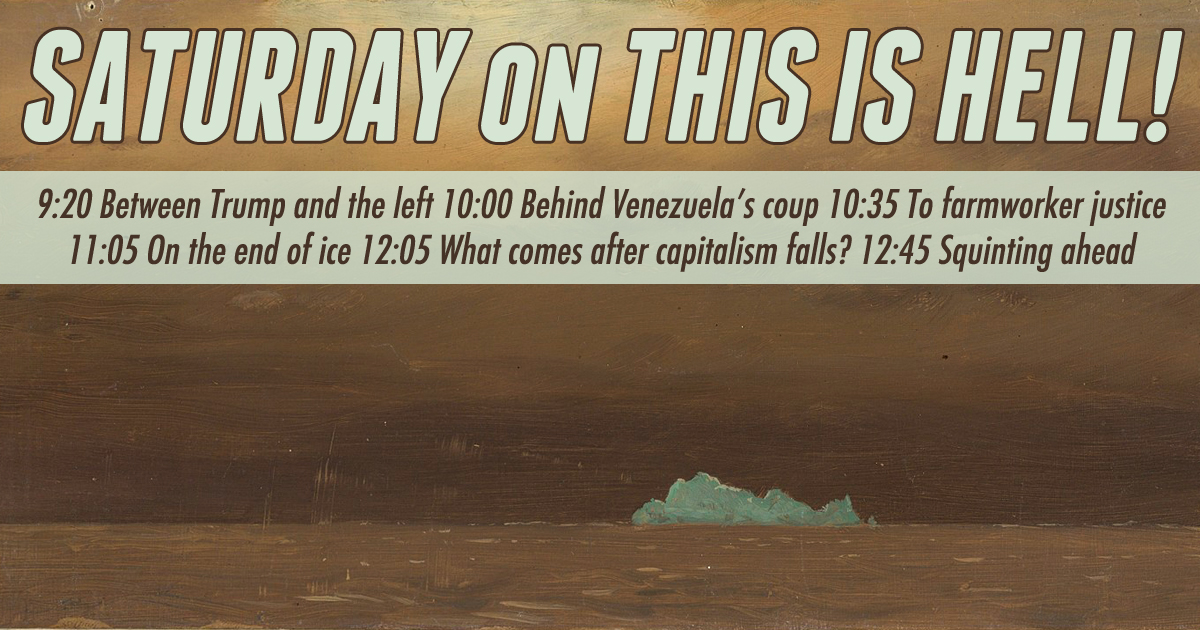 Nicole wrote the paper America’s Tipping Point? Between Trumpism and a New Left for Socialist Register.

Jorge wrote the article Washington Moves Towards 'Regime Change' in Venezuela for Venezuelanalysis.

10:35 - Writer Olivia Heffernan reports on the work of building a farmworker labor movement.

Olivia wrote the article Are we prepared to pay the price for farmworker justice? for openDemocracy.

Dahr is author of the book The End of Ice: Bearing Witness and Finding Meaning in the Path of Climate Disruption from The New Press.

12:05 - Author Peter Fleming makes the case for revolutionary pessimism as we face the future.

Peter is author of the book The Worst Is Yet To Come: A Post-Capitalist Survival Guide from Repeater Books.

12:45 - In a Moment of Truth, Jeff Dorchen squints at the future of disaster capitalism.

Is that being near-sighted or far-sighted, I always get those two mixed up. 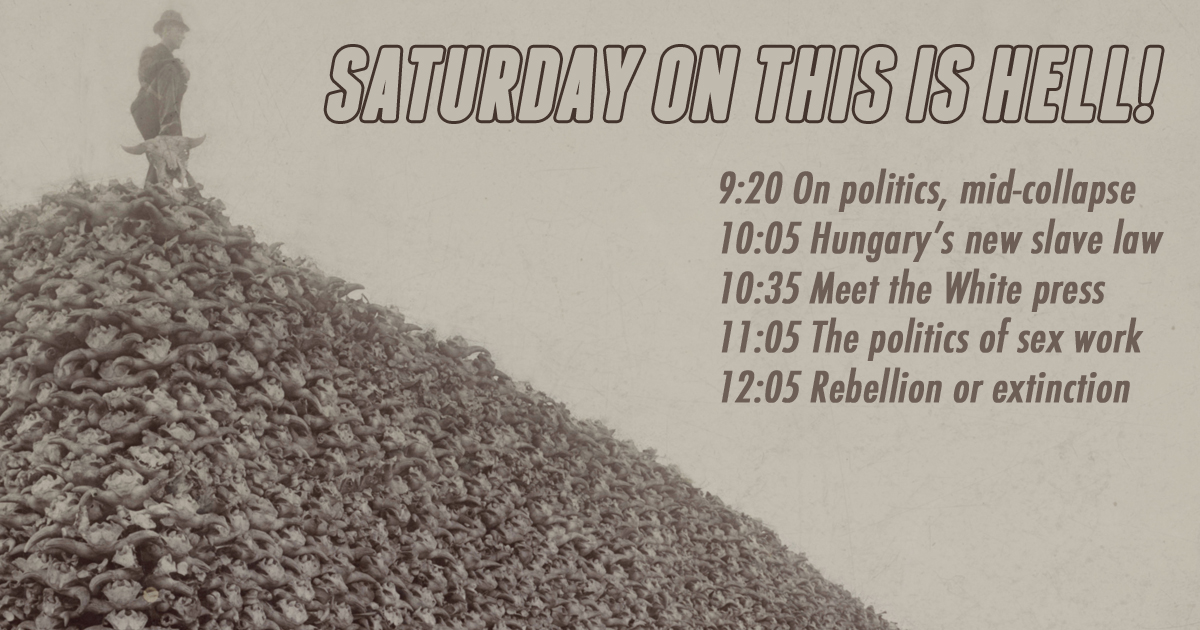 9:20 - N+1 editor Marco Roth examines the political futures of a world on the edge of ecological collapse.

Marco is co-author of the N+1 essay The Best of a Bad Situation.

Todd will be talking about a protest wave against new laws on overtime pay, court centralization and university privatization.

Aaron wrote the article The Whitest News You Know for The Baffler.

11:05 - Writer Molly Smith explores the work - and politics and feminism and economy - of sex work.

Clare is a co-founder of the movement Extinction Rebellion.