NOW PLAYING: War in Afghanistan in 2020: Just as much violence, but no one wants to talk about it | Kate Clark
This Is Hell!
Manufacturing Dissent Since 1996
Subscribe to Podcast
New interviews throughout the week
Interviews
Guests
About
Support

Going forward for all: From food system crisis to agroecology

If people can become more aware of what food actually is - where it comes from, who grows it, what they go through to grow it, what climate change means for production - if people can begin to understand what the producer needs, and the producer can understand what the people they are provide food for actually want, and have discussions about what's possible and what's not possible... That I would not describe as 'going back' to something old. I would describe it as very potentially a major development, a 'going forward' for all of us.

Helena Paul examines the disasterous consequences of global capitalism and its industrial food system - on the environment, humans and the relationship between us - and explains how a massive shift to the sustainable practices of radical, democratic agroecology.

Helena wrote the article Looking beyond the pandemic: Agroecology, and the need to rethink our food system for Radical Ecological Democracy.

Moment of Truth: Things Fall Apart... or They Don't.

Talking with some of the regulars at Lily's Coffee at the Laurel Canyon Country Store Monday morning, I was led to an epiphany of sorts. You know how I love my epiphanies. We were talking about how pet philosophies seem to wear out their usefulness after a while. Obviously this isn't something that troubles philosophers who spend their lives developing their thought shenanigans, but for those of us groping through the fever of our lives, merely splashing our faces with philosophies here and there, who don't have the time or desire to dive deep into the currents of thought, for us a thought-pool like Existentialism or Stoicism, used as a handy refresher of perspective skimmed off the surface of better thinkers' deeper explorations – well, we go through these like Wet Wipes. Because we're not plumbing the depths of ideas, we're busy working and sweating and eating spare ribs or barely eating anything and getting all sloppy, and we just want something to wipe off the day's accretion of schmutz.

As with mental constructs, so with systems and objects in the material world. After many a strike, the subtle rotation of the wrist no longer gets the bowling ball into the pocket. Musical styles begin to wear on the nerves. The car wears out and croaks a dusty death. To a hammer everything looks like nail, but everything isn't a nail. It never was. That way of seeing only stood the hammer in good stead temporarily. Approaches and equipment need to be refreshed and renewed.

Amish Tripathi is an Indian author of adventure fiction, known best for his first series of books, the Shiva Trilogy. He asserts that the initial novel, The Immortals of Meluha, began as a treatise on the nature of evil. How did the immortals of Meluha become immortal? Easy! They drank the somras, the elixir of... read more 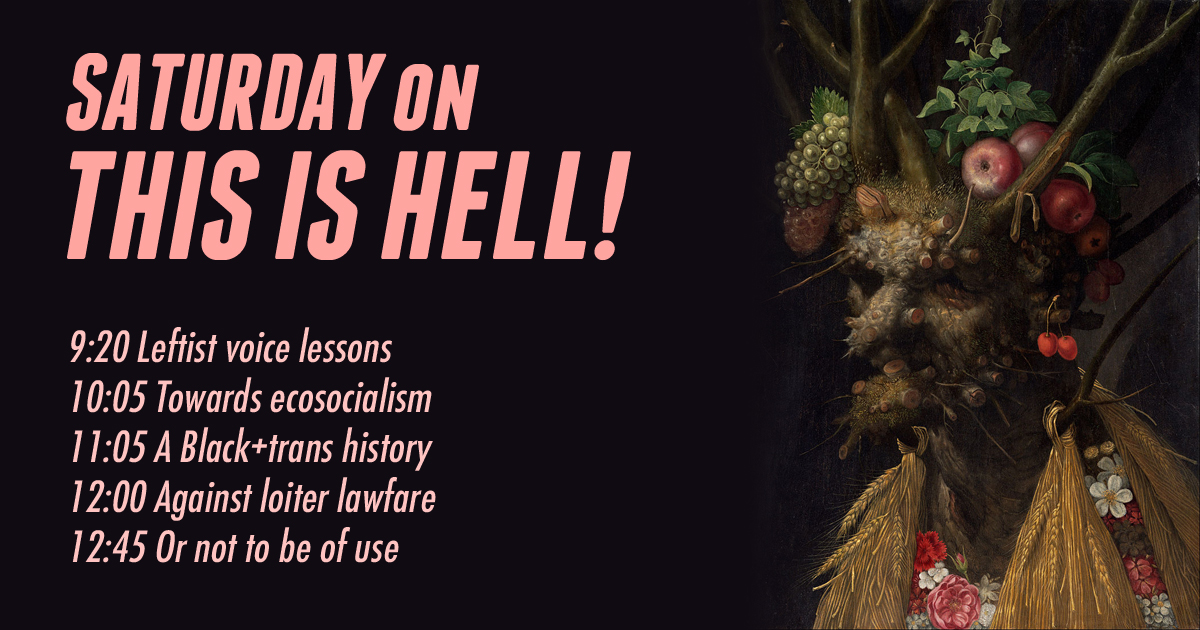 9:20 - Artist Boots Riley discusses finding (and using) your voice in a culture controled by capitalism.

Boots is the writer and director of the new film Sorry to Bother You.

Victor is author of Red-Green Revolution: The Politics and Technology of Ecosocialism from Political Animal Press.

11:05 - Historian C. Riley Snorton traces a history of convergence between Blackness and transness.

Riley is author of the book Black on Both Sides: A Racial History of Trans Identity from University of Minnesota Press.

12:45 - In a Moment of Truth, Jeff Dorchen ponders outliving his usefulness.

Please nobody ponder this about yourself.

I'm in a mood. I know we're all in various moods these days, what with a cartoon pig dictator come to life to clown his antics all over the world in the name of the country in which we live, and dictatorial cartoon pigs wallowing rampant in every other nation where cartoon pig food is abundant. There are any number of subjects I could wax aggrieved about, chief among them the recent vote in the Knesset to officially declare the non-Jews of Israel second-class citizens, so that the accusation of Israel being an apartheid state can no longer be considered an exaggeration. But what at this peculiar historical moment can be considered an exaggeration? We're living in a caricatured era of our civilization's decline.

Meanwhile, a mood-altering event occurred over the past two weeks. A friend from back in the day in Chicago came down with what appeared to be flu symptoms. He became delirious, was taken to the hospital, where his liver was found to be shutting down. Later, in the hospital, he suffered a stroke, causing hemorrhaging on one side of his brain. His platelet count was too low for the doctors to relieve the pressure by cutting him open, and blood thinners failed to do the trick, with the result that the bleeding of one half of the brain crushed the other half. I'm piecing all this together from conversations with friends closer to the experience, so don't take this as accurate, but it seems to jibe with other reports.

I was among friends who saw Jon Schnepp in the hospital last Tuesday. Unable to breathe on his own, he lay there in a state of neural non-function, breathing with the aid of medical machinery. Thanks to his friends and family, I was able to see him that one last time, and it was hard to take, but I'm glad I went; except for the tube and the machines and the unconsciousness, he did not look unwell. I left him a small figurine of the Cyclops, a model of the one Ray Harryhausen animated for the movie, The 7th Voyage of Sinbad. I almost expected Jon to open his eyes and say something. But that, devastatingly, was never going to happen. The word I got was that he was released from this state of non-animation into eternity sometime on Thursday, family members and his fiancee and partner in everything, Holly Payne, by his bedside.

Jon Schnepp was an exceptionally tall, vivid person, with an outgoing personality to match his size and... read more 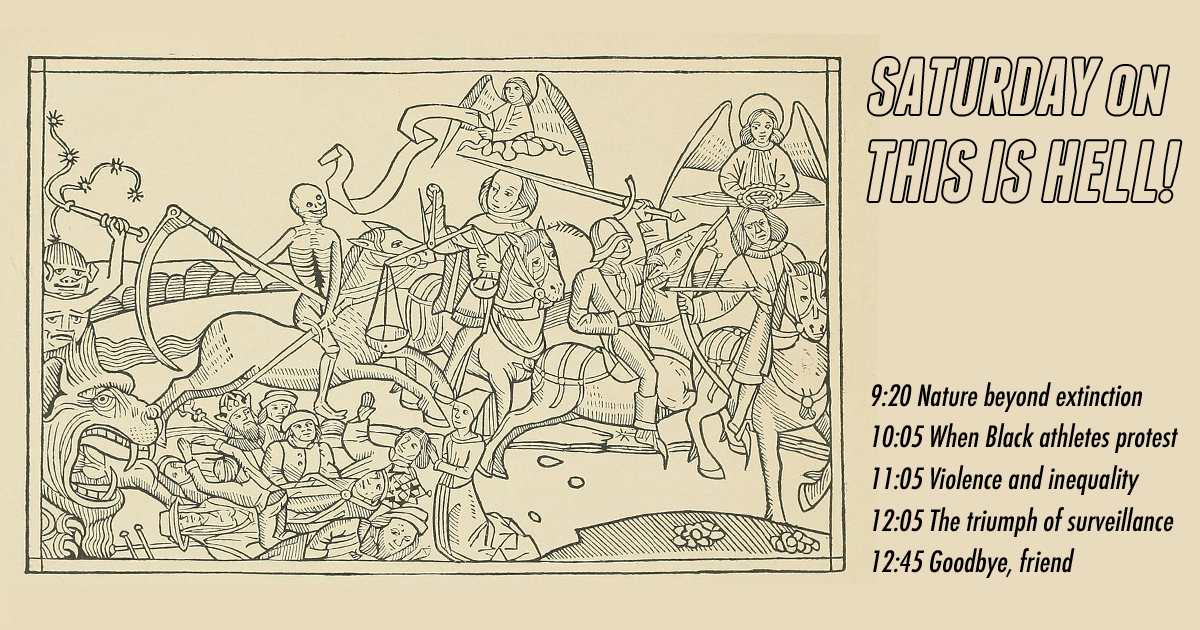 Chris is the author of Inheritors of the Earth: How Nature Is Thriving in an Age of Extinction from PublicAffairs.

Walter is the author of The Great Leveler: Violence and the History of Inequality from the Stone Age to the Twenty-First Century from Princeton University Press.

12:45 - In a Moment of Truth, Jeff Dorchen mourns the passing of a great life. 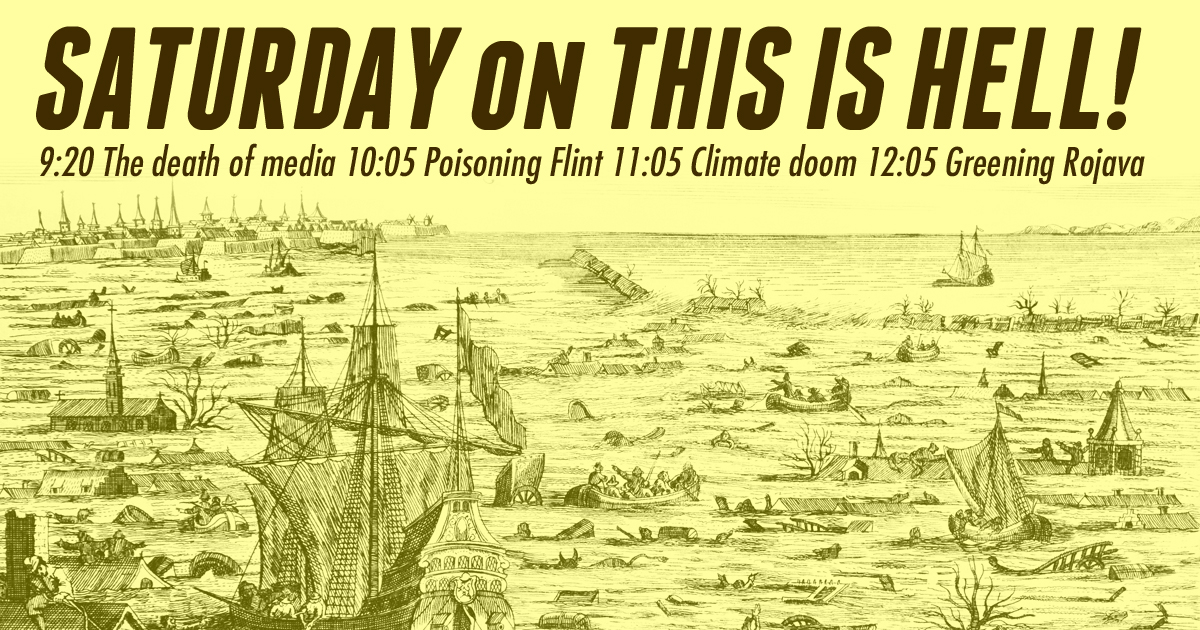 9:20 - Writer Maximillian Alvarez explores the sanctity of waste and ownership in the digital age.

Maximillian wrote the article The Death of Media for The Baffler.

10:05 - Journalist Anna Clark traces the toxic politics that poisoned the people of Flint.

Anna is author of The Poisoned City: Flint's Water and the American Urban Tragedy from Metropolitan Books.

11:05 - Writer Roy Scranton explains how to live on a dying planet.

12:05 - The Internationalist Commune of Rojava discuss the work of social and ecological revolution.

First of all, allow me to apologize: I apologize. Thank you for allowing my apology.

Now, imagine a driveway up the spine of a hill. The top of the hill is a plateau, surrounded in every direction by an abrupt drop-off, so the only way up or down the hill is the driveway. Otherwise, it's a cliff on all sides.

There's a gate at the bottom of the driveway with a combination lock. When you leave the plateau area, you lock the gate. When you want to enter, you first have to unlock the gate, open it, and drive your car up to the top of the plateau. You can leave the gate unlocked until you leave.

Imagine that, when you leave, you have to back all the way down the 45-degree, narrow incline, and it's a pain in the ass because the space between the gate posts is just a little wider than your car.

After you back through the gate, you get out of the car and close and lock the gate. Then you drive off to wherever you want to go. Hamburger Mary's. The library.

But what if you were backing down, stopped the car and got out and locked the gate before you had backed through it? You would have locked yourself in, at least until you unlocked it and let yourself out.

For some reason it struck me as ... striking... that if you do something before a certain spatial/temporal line is crossed, it can cause some inconvenience. If you try to light the burner before turning on the gas, it will not light. If you try to do brushwork before dipping your brush in paint, you will not apply pigment, but only hear a mild scratching noise at most.

Time has an end for humans. It's when we croak. Space has the same end. When you're out of time, you're out of space. There was no time in your life when you skipped over a few inches of space. Your lifelong trail through space is as continuous as your trail through time, and at the end of life, you run out.

If you could... read more 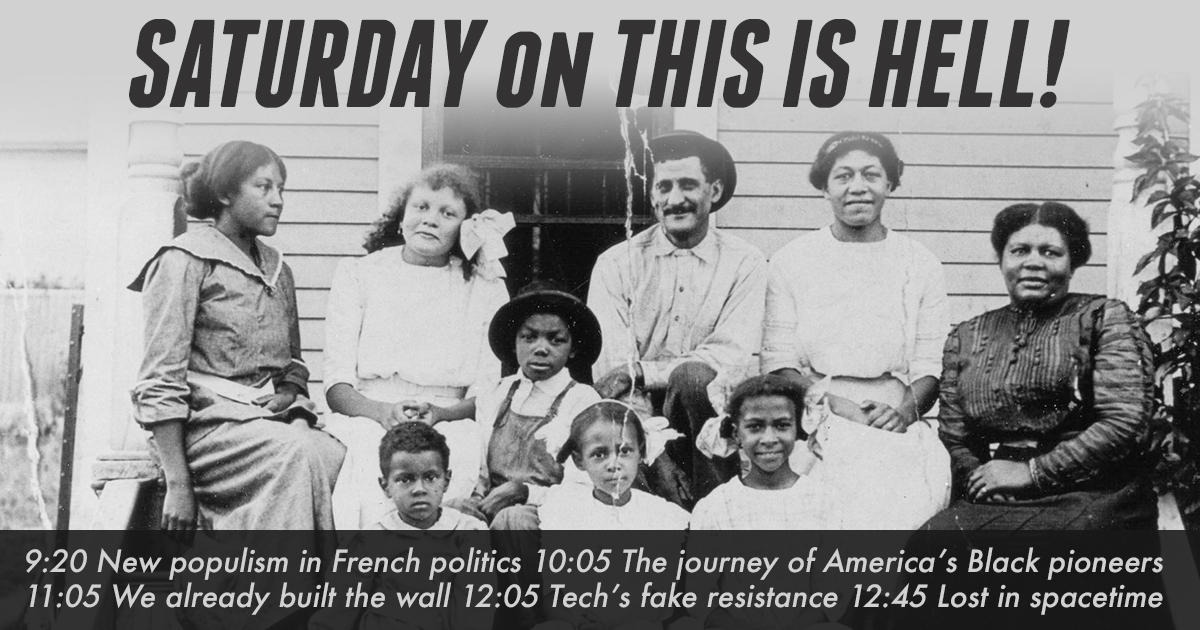 Jacob wrote the article Whose Populism? The Mixed Messages of La France Insoumise for Dissent.

Anna-Lisa is author of The Bone and Sinew of the Land: America's Forgotten Black Pioneers and the Struggle for Equality from PublicAffairs.

Eileen is author of We Built the Wall: How the US Keeps Out Asylum Seekers from Mexico, Central America and Beyond from Verso.

Yasha wrote the article All EFF’d Up: Silicon Valley’s astroturf privacy shakedown for The Baffler.

12:45 - In a Moment of Truth, Jeff Dorchen gets all tangled up in space and time.