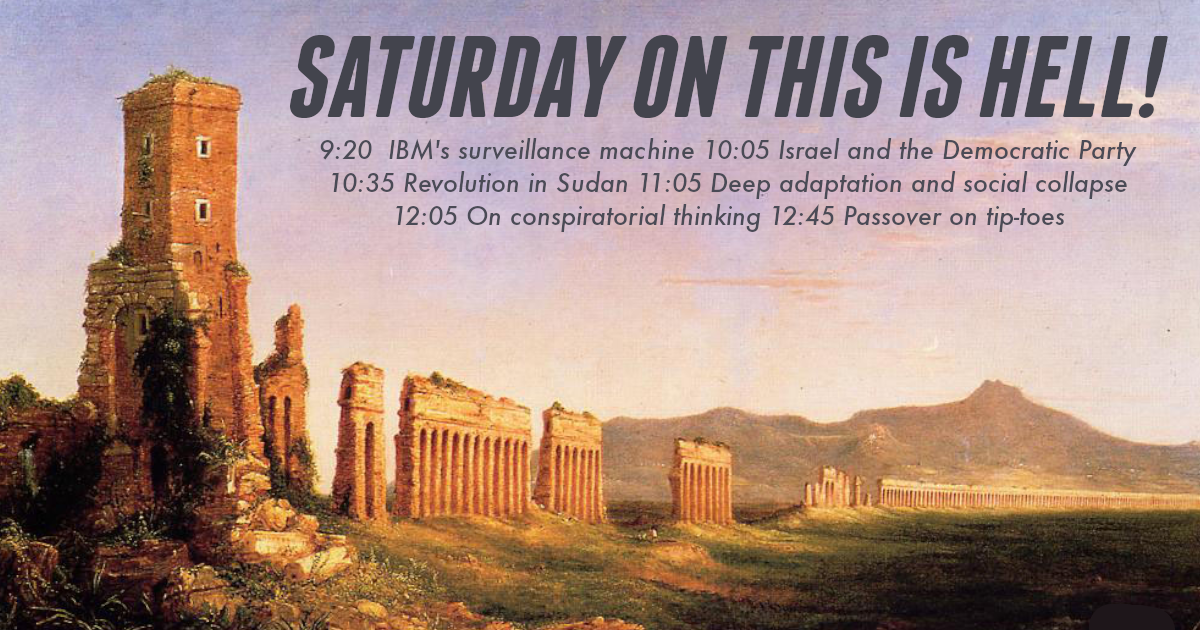 George wrote the article Inside the Surveillance Program IBM Built for Rodrigo Duterte for The Intercept.

10:05 - Writer Noah Kulwin examines the space between Israel's right and the Democratic establishment.

Noah wrote the articles How CAP Fuels the Right for Jacobin and No Reason for Optimism for Jewish Currents.

Andrew is author of the commentary How Sudan’s protesters upped the ante, and forced al-Bashir from power for The Conversation.

Jem is author of the paper Deep Adaptation: A Map for Navigating Climate Tragedy.

Anna is author of the book Republic of Lies: American Conspiracy Theorists and Their Surprising Rise to Power from Metropolitan Books.

12:45 - In a Moment of Truth, Jeff Dorchen tiptoes around Passover.

Moment of Truth: The Gods of Infinite Promise.

Spread the word to all the venture capitalists you know: I have the secret to eternal youth, immortality, invulnerability, invisibility, time travel, instantaneous transport, and control of all matter and energy. Right now it’s in the secret idea development stage, but just a few billion dollars will turn me and few lucky dupes into the saviors of humanity and make us wealthy beyond the limits of earthly human reason.

An investment of a million dollars will buy you “nice try” status, and you will receive a promissory coupon for an unlimited number of rides in the Mach 99 fat-tire stroller to oblivion. Two million dollars gets you twice as many rides. And so on until math runs out.

An investment of 400 million dollars will get you on the board of directors, 150% of voting shares, and an invisible royal garment.

I can take just a drop of your blood and turn it into enough loaves and fishes to feed a great multitude.

Now is our time! The time of infinite promise and zero fulfillment! We shall be gods, promising good fortune and, ultimately, heaven, but delivering only that which a mythical savior who lacks actual existence can deliver.

We are the best and brightest: when it comes to promising, we can do it all. When it comes to luxuries and miraculous sights, sounds, flavors and sensations, we procure them for ourselves.

And when it comes to solving the actual problems afflicting humanity, we, just like God, do absolutely nothing, almost as if we didn’t exist.

But we do. We are the living church, glories of architecture, marble and gold, the paragon of all the arts and sciences, and you can visit us long enough to worship and drop a few coins in our collection plate. After all, the people create the gods, and feed them with their blood and money.

You know who contributed the altarpiece? Henry Kissinger. Just think, you could pray to a sculpture that Henry Kissinger paid for! The man who won the Nobel Peace Prize for killing the greatest number of Indochinese in a single war.

We have all the money. Do you want some? You’ll have to make it worth our while.... read more 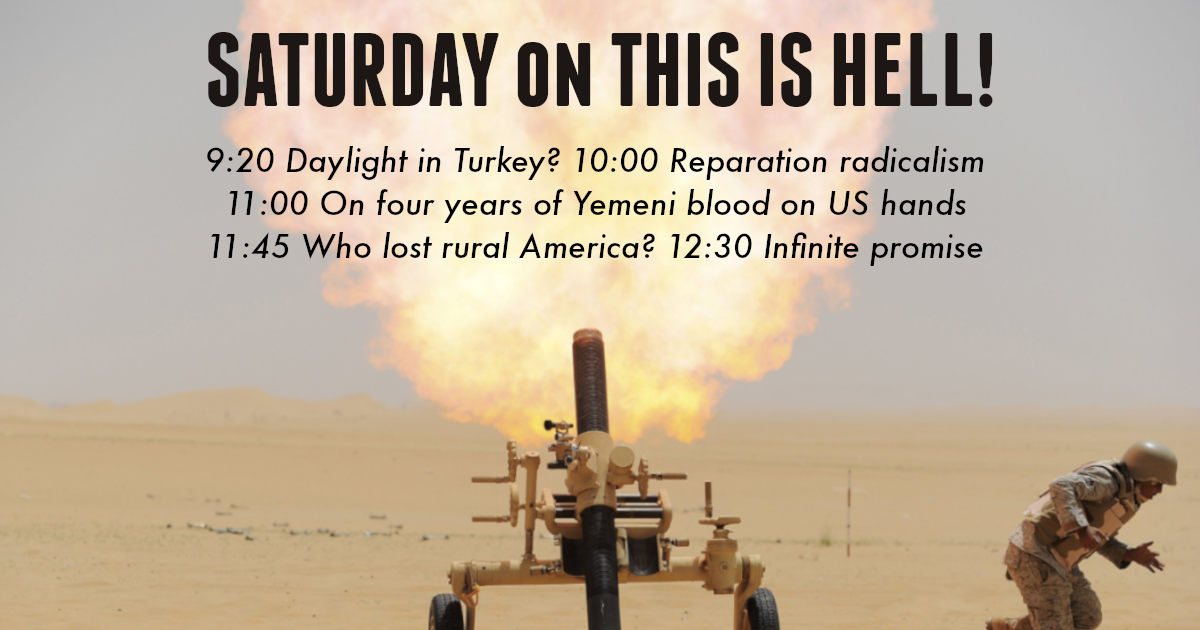 9:20 - From Ankara, journalist Max Zirngast reports on a new, narrow opening against the fascist slide in Turkey.

Max is co-author of the article Daylight in Turkey? for Jacobin. Listen to Max's earlier reports here.

10:00 - Writer Glen Ford explores the possibilities of reparations, and the limits of the Democratic party's racial politics.

11:00 - Writer Shireen Al-Adeimi examines the bloody US hand in the ongoing atrocities in Yemen.

Shireen wrote the article As War on Yemen Hits the 4-Year Mark, Here’s a Brief History of U.S. Involvement for In These Times.

11:45 - Writer Tarence Ray explains what liberals miss when they look past rural America.

Tarence wrote the article Get Real for The Baffler.

12:30 - In a Moment of Truth, Jeff Dorchen sells you the secrets to infinite promise.

Moment of Truth: The Crack in the Facade

I’m going to say this twice. Once here at the top, and a second time near the end. The first time because I think it’s something on which everyone who opposes the controlling economic, political, and information system, as it is, can all agree. The second time because I will want to remind us all of its salience in light of what I’m about to lay out: the basis of a unified conspiracy theory of global fascist movements, large and small, in governments and in the streets.

This is the statement I wish to color all that will proceed hence: The establishment opposed to Donald Dump believe there is a line, below which he sits, on his tasteless gold toilet, tweeting his misspelled words and doing his second-tier, declasse-collar crimes, while they look down their noses from their understated, right-thinking, right-acting positions of propriety. What they don’t realize is that, while they bend over to scold him and dirt-devil up the shards and crumbs of the taco bowl he left on their lovely carpet, Dump is actually their own ass crack hanging shamefully out of the back of their silk-linen blend trousers.

I’m not arguing that Donald Dump conspired with Russia to break laws and undermine the 2016 election. He and/or his shitty family may have done that, and there may be evidence in the Mueller report that warrants further investigation into that. There is certainly the appearance of impropriety, which is one reason there was an investigation in the first place.

Hillary Clinton didn’t lose the 2016 election because of Bernie Sanders or because of Russia. The British public didn’t vote “leave” because of Russian interference. I want to make it clear that I am in no way pushing those narratives. But that doesn’t mean Russia’s noodling around, egging rightward mischief here and there, while entangled in shady deals for a few million here, a few million there, isn’t a dark-money connection worth understanding. It is. John Gotti was a little tiny parodic maquette of the larger capitalist system, but he had to be brought down. Jon Burge wasn’t in charge of all the racism in Chicago, but he was a problem, and if he could die again much more brutally, that would be a good thing.

The premise that, as a wise man named Chuck Mertz has said time and time again, “Everybody’s... read more 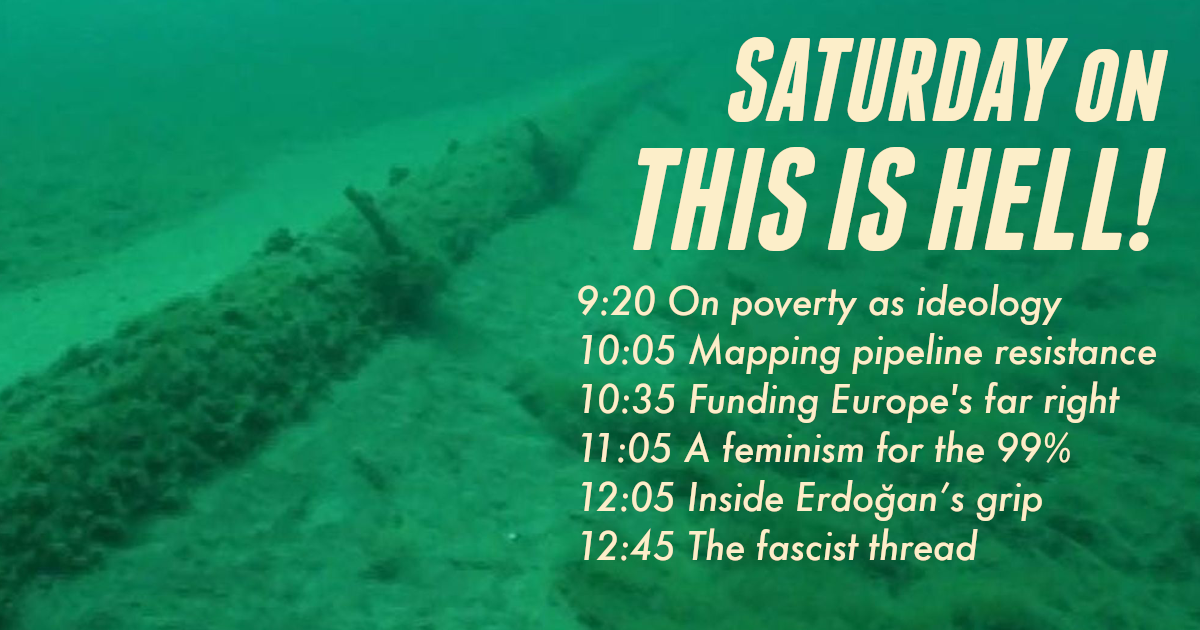 9:20 - Political economist Andrew Fischer studies poverty, and the study of poverty, beyond the neoliberal frame.

10:05 - Writers Duncan Tarr and Noor us-Sabah explore the Midwestern oil pipeline that ties us all together.

Duncan and Noor wrote the article The End of the Line for Commune.

Claire Provost is co-author of the report Revealed: Trump-linked US Christian ‘fundamentalists’ pour millions of ‘dark money’ into Europe, boosting the far right from openDemocracy.

11:05 - Philosopher Cinzia Arruzza examines the anticapitalist, eco-socialist and antiracist reach of a feminist for all.

Cinzia is co-author of Feminism for the 99%: A Manifesto from Verso.

Max is co-author of the article Discontent Is Brewing In Erdoğan’s Turkey from Jacobin.

12:45 - In a Moment of Truth, Jeff Dorchen pulls a thread and unravels a unified conspiracy theory of fascism.

Moment of Truth: Esther Is Antifa

I like Purim. Purim is the Jewish Carnivale or Mardi Gras. It celebrates the story of Esther, who saved the Jews from destruction during the Babylonian captivity. The Biblical story was embellished in some aggadot, or Talmudic stories, and later apocryphal legends and early medieval fan fiction. The Targum Esther, or Targum Sheni, from about the 4th century CE, and the Targum Yerushalmi, really go to town in their elaborations on the tale. They expand the Megillah the way Spike Jonze took “Where the Wild Things Are,” a 38-page book that’s mostly pictures, and turned it into a two-hour horror movie that was basically The Revenant meets HR Puffinstuff. I drew most of my information from Volume IV of Louis Ginzburg’s 7-volume masterpiece of lore-gathering, The Legends of the Jews.

Part of the celebration of Purim is the telling of the story. And I shall be hitting some of the highlights:

King Ahashverus, of whom there is no historical record, ruled all the world from Ethiopia to India, so says the Megillah. Targums say that, before the events of the story, the king sent several armies out to conquer India. Mordecai, his Jewish advisor, had a battalion. Haman, one of his Amalek advisors, had a battalion. Various other commanders had battalions. And each commander had a war chest. And Haman, like a jerk, squandered his war chest on chicken tikka masala and mango lassis, so when he couldn’t pay his troops, he goes begging to Mordecai, and Mordecai says, can’t help ya bruh. But Haman begs so pitifully, Mordecai says, Okay, but you have to agree to be my slave for the remainder of the India campaign. Haman agreed, and they wrote up a contract. But they didn’t have any paper. So they wrote it on Mordecai’s knee. Mordecai apparently had it tattooed on his knee, because even years later, to get on Haman’s nerves, every time he’d pass by Haman in the palace or in the street, he’d lift up his knee in a very silly walk, and point to it, so Haman could see this shameful reminder of his stupidity, and Mordecai would go, “Hey, man! How you doin’?” This may be the root of Haman’s grudge against Mordecai and the other Jews.

I’m not making this up. Someone else made this up, about 1,600 years ago. Targum person. Targum scribe. What should we call them. T-something. In the... read more