Maybe It’s Time To Give The Fascists Another Chance

Everything old is new again, as the saying goes. Whitey is back, have you noticed? Not the word, the guy. Whitey. The guy who went to the Moon while Gil Scott Heron’s sister Nell done got bit by a rat. Whitey, rapey, assassinatey, pollutey, corrupty, flag-wavy, and Nazi. The seven warpeds. They’re all back. It’s almost like they never left.

Ever since their crushing defeat in WWII (Francisco Franco a notable exception), fascists have been on what the English call, “the back foot.” Governments from 1945 onwards have been dominated by non-fascists and crypto-fascists, in numbers far greater than their percentage in the population at large, if recent exercise of the public franchise in the West is any indication. What qualifies non-fascists and crypto-fascists to take such an outsize chunk of the pie of governance? Have you seen how they’ve mismanaged things so far? The Western democracies today suffer from shaky currencies, inter-cultural strife, municipalities hamstrung by austerity caused by corporate corruption and justified by false shortages, and the icing on the cake, a sure sign of decaying social cohesion and the failure of the ruling class: these nations are all teetering on the brink of fascism!

So maybe it’s time to give fascism another look. If the best the current non-fascist and crypto- fascist rulers can deliver, at the end of three quarters of a century of having it their way, is a collapse into fascism, why not give fascism a try? Fascism has been in remission for longer than anyone expected. Like a case of shingles, why not just accept it and try to make the best of it? When life gives you shingles, or fascism, surely there’s lemonade to be manufactured. That’s what the fascists would have done. Or would have had some prisoners do for them.

Fascism clearly has some very attractive qualities. Rigid, brutally-enforced order, for one. It kept the trains running on time, the streets clean (when they weren’t coursing with blood or littered with broken glass), and the working class in an appropriately terrorized, or “eager to please,” condition.

Fear was the great motivating force. You could always tell where you were in the social order by who it was you were afraid of. The ambitious aspired to rise from fearing the bureaucrat immediately above them to being... read more 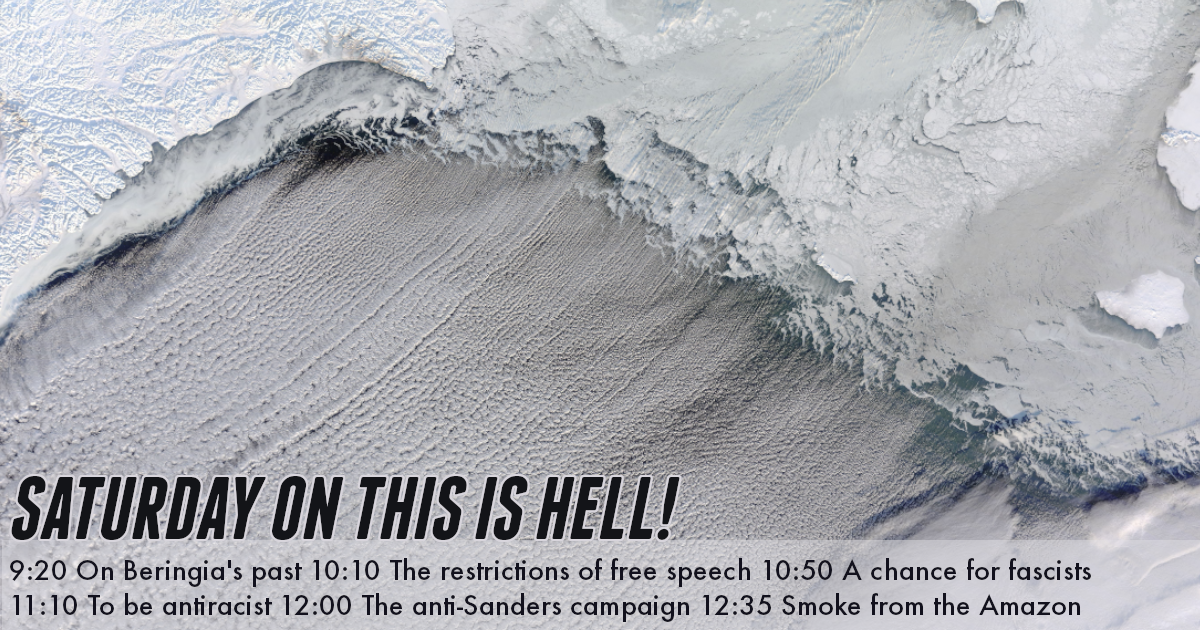 Bathsheba is author of Floating Coast: An Environmental History of the Bering Strait from Norton Books.

10:10 - P.E. Moskowitz examines the problems with free speech in an unfree world.

P.E. is author of The Case Against Free Speech: The First Amendment, Fascism, and the Future of Dissent from Bold Type Books.

10:45 - In a Moment of Truth, Jeff Dorchen wonders if maybe it's time we gave the fascists another chance.

I just paste what he sends me folks.

11:10 - Historian Ibram X. Kendi looks to an antiracist society, and the path towards it.

Ibram is author of How To Be An Antiracist from One World Literature.

Katie wrote the articles Sydney Ember’s Secret Sources and  MSNBC’s Anti-Sanders Bias Makes It Forget How to Do Math for FAIR.

12:30 - Live from Sao Paulo, Brian Mier reports from under the cloud of the burning Amazon.

Brian wrote the article The Day the Sky Went out for Brasilwire.

On Black Labor in the 19th Century

The Future of Water

Moment of Truth: The Twittering And The Dread

It’s so ironic and strange to me that every morning begins with birds announcing the dawn, accompanied by a feeling of dread. It’s such a funny contrast to me, the pretty bird song and the hopeless, dying heart. The night recedes as the day trickles in, and I wake up to nature’s bucolic musical optimism meeting my own deep pessimism. And fear. Let’s not forget the fear. Pessimism is just an amateur activity if unaccompanied by dread.

It’s a relief to know that friends in Puerto Rico have been partying all night getting rid of a lousy governor, and preparing to do more. It’s pleasant. It makes the singing of birds seem not so out of place, as if what we call “nature” and what we call “humanity” might be able to coexist. It’s like finding that the missing piece of the puzzle wasn’t missing, you were just placing it backwards. It fits! Like a revelation.

Once I see people doing it in one instance, I notice others. But I’m not here to talk about them. That would be wonderful, but I’m not in a wonderful mood.

Having a reason to get out of bed has never been my forte. I suppose that’s why God or nature or whatever trickster-ish cosmic force gave me a bladder and bowels. Once I’ve got my wits about me, it’s too late, I’m already up and functioning. The decision to get up into the world has been taken out of my hands. From then on it’s do-or-be-done-to.

Like what it seemed was happening to the people of Puerto Rico. Getting blown and flooded by a hurricane. Getting ignored and insulted by the various governments whose job it is to aid them. Getting austeritied. Getting privatized. Throughout it all, they took the wheel whenever they could. They helped each other in the hurricane’s aftermath, which certainly must have had a unifying effect, preparing them for these days of wonderful, inspiring action.

They’re turning it around. I should be able to turn it around, too.

BTW, I’m just so excited to hear Dave Buchen report live from San Juan, that I can barely think of dreading anything right now. And by this point, unless something has gone wrong, I’ve probably heard it already! Was it great? Answer: 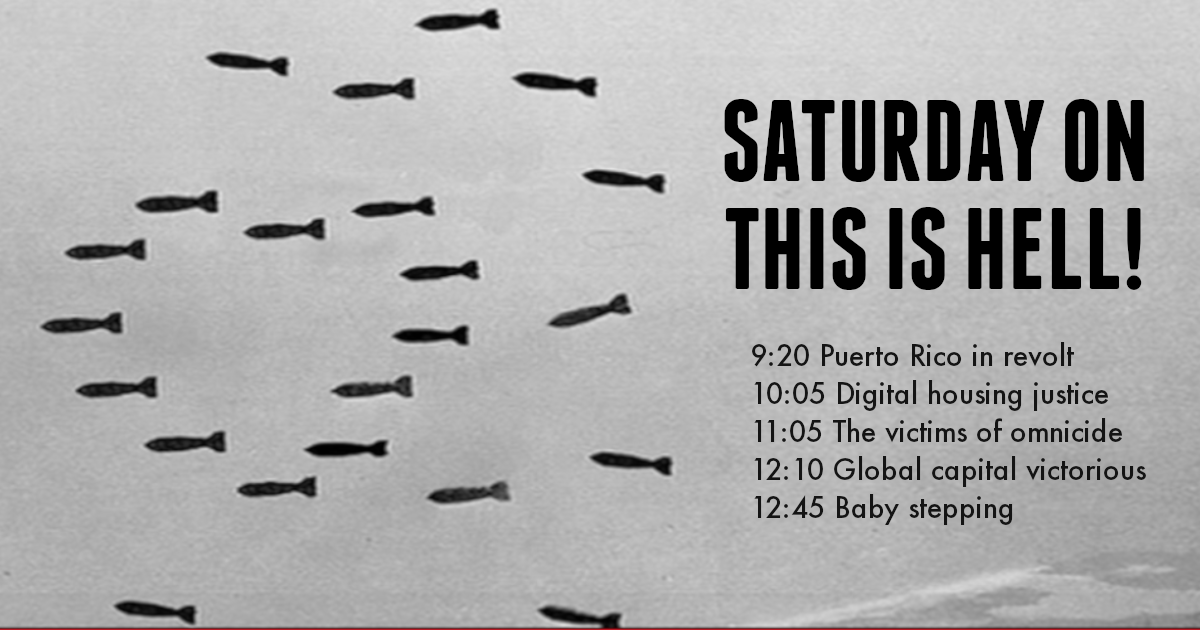 9:20 - Our Man in San Juan, Dave Buchen reports on the rollercoaster that might become a revolution in Puerto Rico.

Dave wrote a short piece on Facebook about the protests, and will be reading a long piece on-air.

10:05 - Geographer Desiree Fields explores the mechanisms of exclusion and heirarchy in the digital housing market.

11:05 - Peace activist Kathy Kelly speaks for the victims of an omnicidal war machine - from Gaza to Kabul.

Kathy wrote the recent articles The Ongoing Dread in Gaza: So Many Names, So Many Lives and Remnants of War for Voices for Creative Nonviolence.

12:10 - Sociologist William I. Robinson points toward a new understanding of global capitalism in the 21st century.

William wrote the book Into the Tempest: Essays on the New Global Capitalism for Haymarket Books.

Moment of Truth: Do You Know What A Stork Is?

I drove by two older white people arguing. Each seemed to be the representative of a group of onlookers. One demanded heatedly, belligerently, “Do you know what a stork is?” Challenging. But in a flash I’d driven past. And I could only wonder what this challenge was in reference to. Was it in fact a duel of ornithological knowledge?

Did you hear me? Was it? Are you listening? Are you even present?

Oh look at you. Good for you. You're here. That's more than most people can say. There are a few ways to look at it. Either we're all among a select few, or we're among a crappy few, or we're just a random set.

Don't be mean to me. I will cry. That's my trademark. That's what I was known for, as a baby. Oh, like you never cried when you were a baby. Well, I cried a lot. I cried every day. I cried and cried. I was known as the town crier.

So it shouldn’t be a total loss, I'm gonna get some work done while I'm up here. I got some vegetables to chop. Gotta make a stock. Got some dinner parties coming up. Gotta have homemade stock.

Stock is good as a basis for soup, sauces, and reheating/rehydrating savory leftovers. Rice, buckwheat groats, faro, and other grains are nice when made with stock. Some vegetables need to be blanched or boiled, and stock is the way to go. It adds richness and flavor to boiled things, things people are enamored with roasting these days, such as root vegetables, cauliflower, and Brussels sprouts. These can profit from a bit of blanching or even boiling in a stock before being put in the oven or under a broiler.

Hills, or even mountains, rise from the mist in the distance. Not really mist, more like haze, although unlike most days the haze is white with only a slight off-white tinge of smog and dust. Later today, I imagine, it will brown to an unsightly umber.