Fed up and not afraid! - Jacquelin Kataneksza [Africa is a Country]

On this day in 1683 – (333 years ago) – on the southern coast of what is now Taiwan, the Chinese admiral Shi Lang arrived with a fleet of 600 warships and 100,000 men to invade the kingdom of Tungning, which ruled the southwestern part of the island, and claim it for the Qing dynasty. The Tungning defense forces fought hard, but they were fatally outnumbered and outgunned by the Chinese, who used Dutch-manufactured cannons to bombard the shore while 60,000 Chinese soldiers disembarked, made their way to the Tungning capital, burned it down, and forced its leaders to surrender. Some 10,000 to 15,000 soldiers and sailors on both sides died in the battle, which marked the permanent demise of the Tungning kingdom.

On this day in 1942 – (74 years ago) – in a large coordinated operation, police in Paris, acting under the direction of Nazi Germany and France’s collaborationist Vichy government, spread out over the city and quickly rounded up and arrested more than 13,000 Jewish people, including more than 4,000 children, and herded them into a bicycle racing arena without adequate food, water, or sanitary facilities. The prisoners were soon loaded onto trains and sent to the concentration camp at Auschwitz. It was just one of many operations in the Nazis’ larger plan to exterminate the Jewish population of Europe in the 1940s.

On this day in 1945 – (71 years ago) – in the deserts of New Mexico, US Army scientists of the Manhattan Project, led by J. Robert Oppenheimer, conducted the world’s first detonation of a nuclear weapon. The atomic bomb test, codenamed “Trinity,” produced an explosion equivalent to 20,000 tons of TNT, which was two to three times more powerful than the scientists had expected. The mushroom cloud rose more than seven miles high, and the shock wave could be heard 100 miles away. In spite of the remote desert location, the bright flash and enormous explosion of the top secret weapon were seen and heard by unsuspecting civilians. The Air Force issued its cover story in a press release, stating that it had been an accidental explosion in a remotely located ammunition magazine. A few weeks later, two more bombs of roughly similar explosive force were detonated over the Japanese cities of Hiroshima and Nagasaki, together killing an estimated 150,000 to 200,000 people. 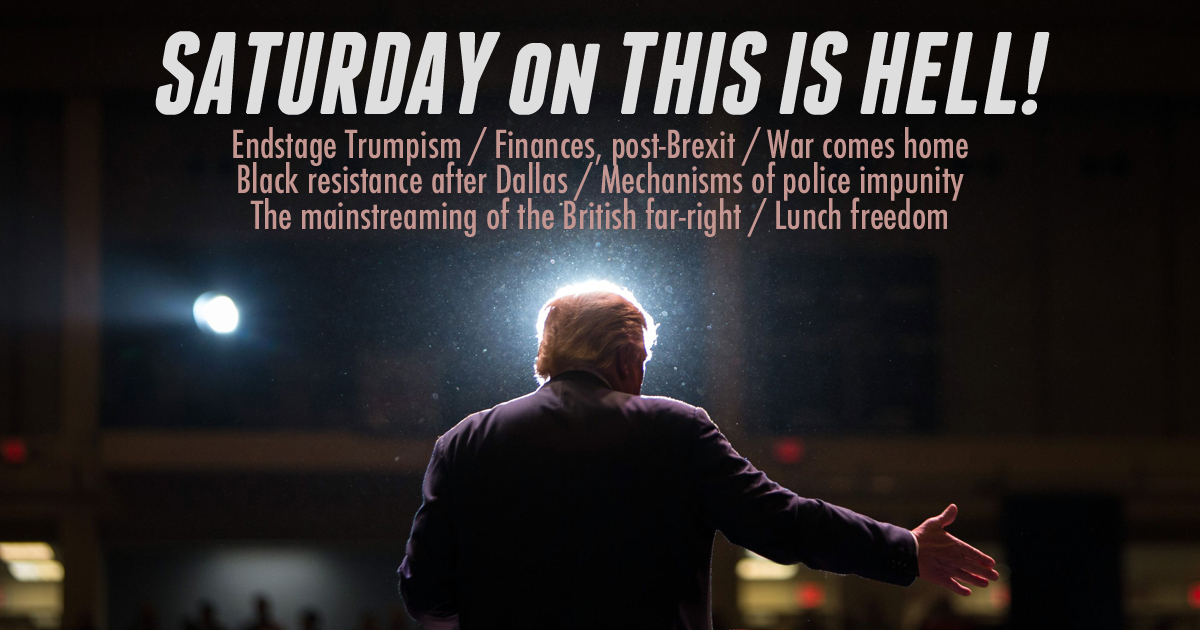 This is Hell! is celebrating 20 years of journalistic excellence by getting drunk at a bar after the show. Join us.

Henry is author of the essay Anti-Politics and the Plague of Disorientation: Welcome to the Age of Trump for Truthout.

Dean wrote the article Right-Sizing the Financial Sector in Post-Brexit Europe for Truthout.

Flint is representing the family of Derek Williams, who died in the backseat of a Milwaukee police squad car in 2011.

Nicole wrote the article How the British Far Right Went Mainstream for Dissent.

12:40 - In a Moment of Truth, Jeff Dorchen finds a free lunch, and you'll never guess where!

Jeff will be in studio, hopefully not eating that lunch, for the whole show.

Anti-Politics and the Plague of Disorientation: Welcome to the Age of Trump - Henry Giroux [truthout] 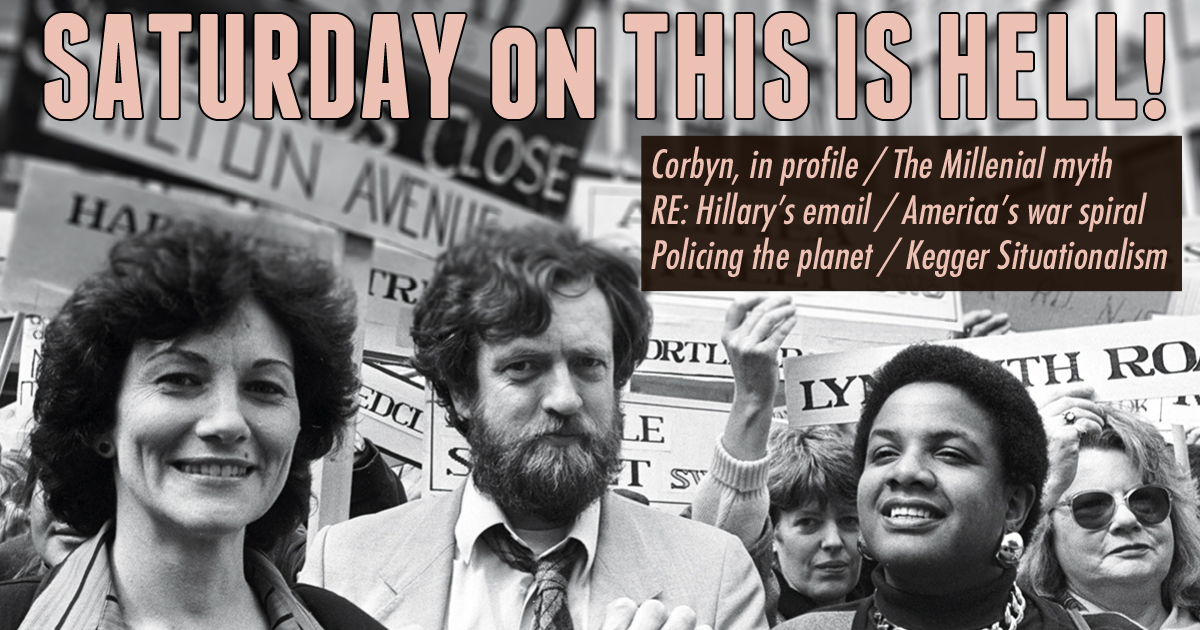 Richard is author of Corbyn: The Strange Rebirth of Radical Politics from Verso Books.

11:05 - Writer Mark Danner explains how America lost its identity in the pursuit of endless war.

12:45 - In a Moment of Truth, Jeff Dorchen taps the bottomless keg of situational paradox.

Oh hey speaking of kegs, Jeff will be in town for TIH!'s 20th anniversary party - see him IRL.