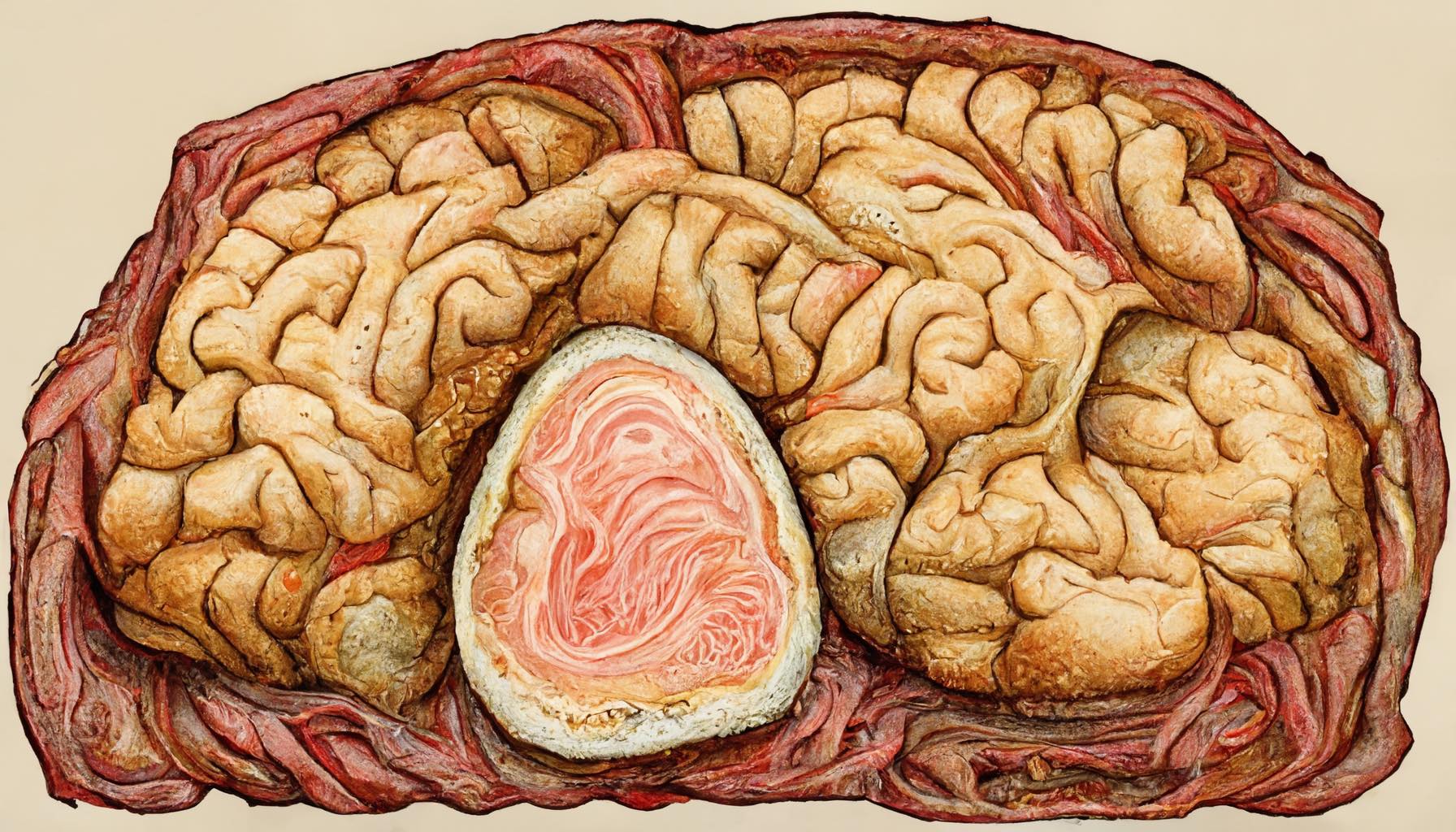 Myrtle Adelweiss looked at the assemblage of gestural lines in the picture. In the image they formed, she saw no fish. Neither did she perceive a mermaid. What she saw was the head of kangaroo.

What did it mean? Was she right-brained or left-brained?

One day, Myrtle was at work, at Nordnik High School, coaching the varsity football team. While demonstrating to her beefy players the correct way for a linebacker to plunge ahead at the snap of the ball, she received a concussion from a slab of gristle named Artie Snigginbotham. Myrtle was rushed to the emergency room at Sleater-Sinai-Sloater-Kinnering, unable to recall her own name.

Every image, regardless of what test was done, showed one miraculous fact: between the two hemispheres of Myrtle’s brain lay a third lobe, nestled between them like a summer sausage between two napping, hairless, Sharpei-wrinkled guinea pigs. Dr. O’Brain called it “The Third Lobe.” It became known in neurological literature as The Adelweiss-O’Brain Lobe. “The Third Lobe” was cooler, though.

But what was the function of this extra loaf, or lobe, in the brain of Myrtle Adelweiss? How had this “third loaf” been acquired? How long had it been in amongst the payload of Myrtle Adelweiss’s cranium? Did it confer any other advantages to her besides the obvious one of allowing a third interpretation of an ambiguous figure meant to elicit one of two specific interpretations? What good was this third loaf, if any?

For the next three years, O’Brain conducted a wide-ranging study of people who saw a kangaroo head instead of either a mermaid or a fish in the picture that had given Myrtle Adelweiss a bit of agito. Various types of brain scans revealed that the majority of these specimens had the summer-sausage-shaped third loaf.

What else did they have in common? There was no single phenotype, genotype, ethnicity, religion, or economic class they shared,... read more 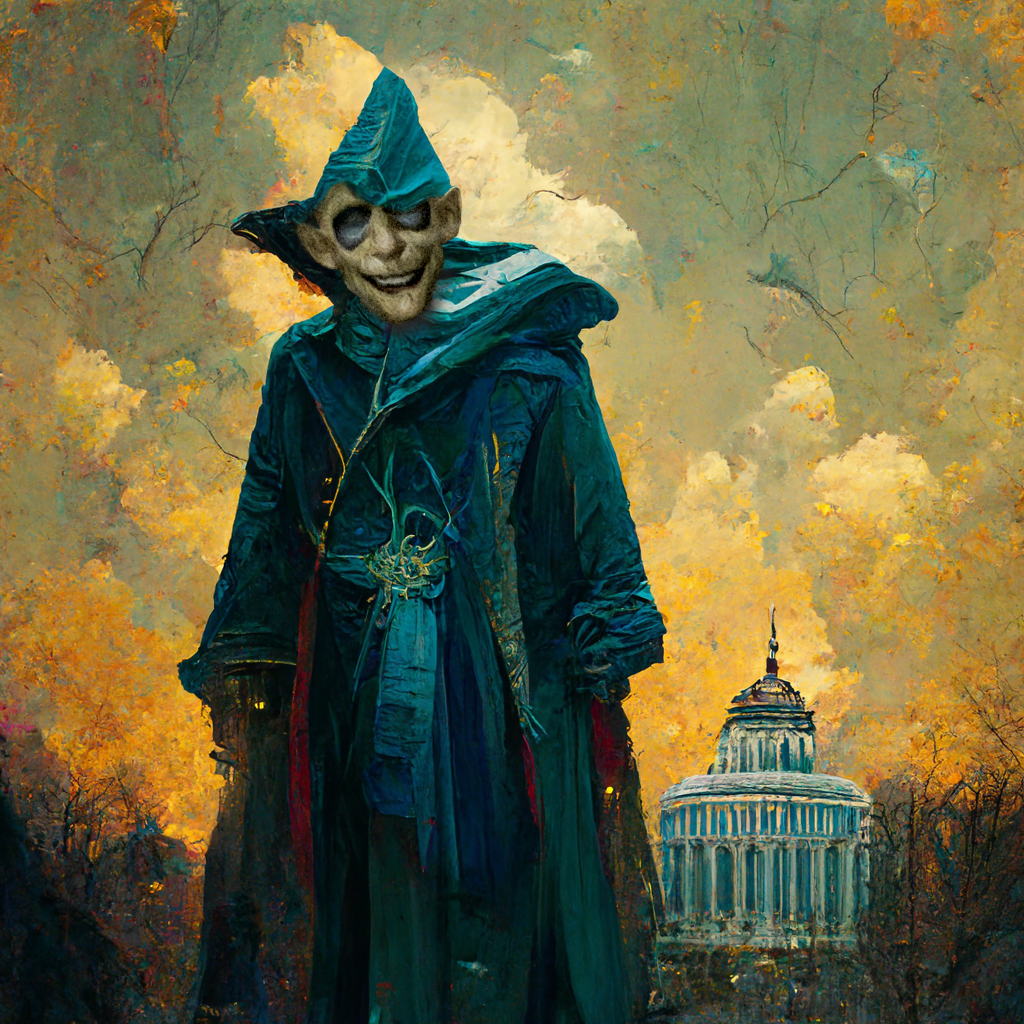 Since the beginning of time, money has been known to evaporate into thin air. There’s a saying: “Time is money.” It was originally said by managers to their subordinate laborers in order to urge them to work faster. What the manager didn’t reveal was that the money he referred to belonged to the owners and shareholders, not to the workers. Their wages remained the same regardless of the speed of their toil. Mathematically speaking, the faster they worked, the lower their real wages, because they accomplished more in the same hour for the same amount of cash.

Denial of remuneration to labor for its increased productivity in the latter-20th and early-21st Centuries was the most widespread case of disappearing money since the advent of paid labor. Like most mysterious disappearances that negatively affected the living standards and buying power of labor, rather than injuring the wealth accumulation of the ruling, owning, and speculating classes, however, it has never been the subject of a paranormal investigation.

This story is not going to change that.

In 1987, Senator Rick Scott was on his way to becoming a big deal in the movement of private buy-up of healthcare services. Ten years later he’d become the CEO of the Hospital Corporation of America, one of the first private hospital companies in the legendary empire known as the United States of America. However, after only four months he had to resign as CEO of HCA due to a federal investigation into Medicare and Medicaid fraud at the company.

The fraud was so fantastically huge that HCA was eventually forced to pay the government 1.7 billion dollars in criminal fines, penalties, civil damages, and other settlements. Many of the fraudulent actions the DOJ found had had to have been signed off on by CEO Rick Scott himself. A lot to accomplish in only four months as CEO.

Maybe because he was so accomplished at fraud, the GOP made Rick Scott chairman of the National Republican Senatorial Committee and... read more

Flooding in East Kentucky Impacts the Poor and Working Class

It was in ancient times when Sapperstein, a teenage pot-smoker, used to cruise up and down Woodward Avenue in the environs of Detroit. He would listen to classic rock on FM radio. His main concern at the moment in question was, “Is Jethro Tull heavy metal or heavy wood?” This was before the various metals became segregated into genres of their own: death metal, krautrock, nerdcore, etc. In a way, Sapperstein was ahead of his time.

He jolted to a stop, coming to full consciousness of the traffic around him just in time to avoid rear-ending a restored classic Pontiac GTO. He almost dropped his pipe. Unknowingly, he’d accidentally hit the “band” button. The radio was now tuned to an AM station. A male voice emerged, speaking in crisp, insistent salvos of rhetoric. “Feminazis,” the voice said. “Reverse discrimination,” it said. “Tree-huggers,” the voice of the man mocked in his flurry of affected disgust.

What was this disembodied spirit? It was infectious. It didn’t infect Sapperstein, but Sapperstein’s father became obsessed with it. Soon the voice was everywhere, and imitators flourished. The landscape of discourse changed for the worse as regulations were dissolved in the service of capitalism’s desires. This history-making voice went by many names, but we now know him as “Lush Rimjob or something, the drug-addict from Missouri.”

Within half a century, the Rimjob ethos had swept the world, and it was a short journey, from the bloviating bag of fecal matter who sprinkled his polemics with lies, to entire networks of so-called news based entirely on lies. That evolution is one of the many reasons, if not the key reason, we find ourselves in the Era of SuperTruth®.

The Sappersteins of the world, and everyone else from his historical context, eventually grew old and ceased to exist. There arose in the West capitalists lauded for turning intellectual property, usually that of others, to their own profit. And from among these so-called thought-leaders, success-gurus, and oracles of progress came one called Elon Kuru III.

Elon was a devotee of Kurtzweil, who predicted the advent of a “singularity,” when synthetic cognition would leave the minds of human beings behind, intellectually and physically. Elon believed he could join that elite mental rapturing. To that end, he had... read more