We have to get back to the question of inequality. I'm less concerned with the abolition of police, than with the abolition of the very conditions that police are there to manage. We want to scale back some of these overblown police departments, but if we don't also deal with inequality, we'll be right back in the same place we are now. That's one of the dangers of the defund rhetoric - it doesn't go deep enough.

Political scientist Cedric Johnson examines the collisions of race, class, policing and activism in the wake of George Floyd's murder, and explains why the Democratic Party and capital threaten to co-opt and re-direct the protest movement's energy unless it commits to a politics of redistribution and power for the working class.

Cedric wrote the article The Triumph of Black Lives Matter and Neoliberal Redemption for Nonsite. 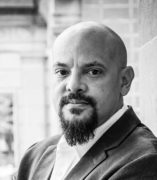